Tomorrow in 1977, we lost film star and Glengormley/Belfast son Stephen Boyd at 45. He starred in The Man Who Never Was, Ben Hur, The Fall Of The Roman Empire, Fantastic Voyage and many more.

I had a crack at writing his biography. It's okay but he deserves a much better locally published, generously illustrated book. So far, my effort is the only book available on his life and career. It ticks along.

During my research, I wrote to his wife Elizabeth and I did not expect a reply. But a reply came and this is it - a treasured possession: 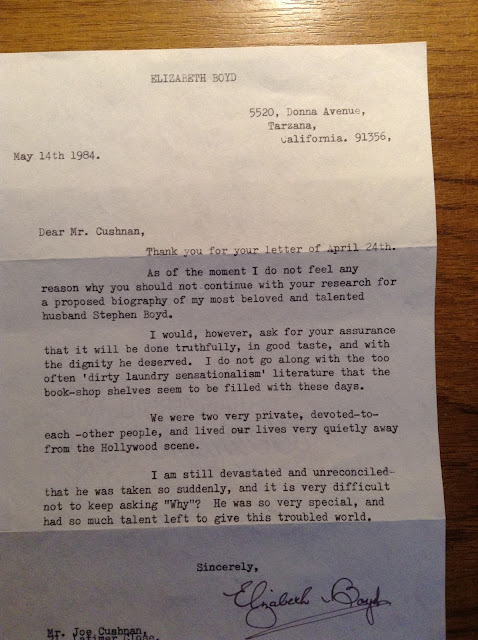 In 2010, I contributed to a BBC NI TV documentary on Stephen Boyd. James Ellis was involved too. I mentioned my book idea on Stephen Boyd and without hesitation Jimmy said he would be privileged to write the foreword, which he did:

“Stephen Boyd was one of the nicest, kindest people I have met in my lifetime, rare in this profession.”
Euan Lloyd, film producer (“Shalako”, “The Man Called Noon” and “The Wild Geese”)

I first met Stephen Boyd, or Billy Millar as he was then known, around 1950 when I joined the Group Theatre in Belfast where Billy was already a member of the company.   He had already made a bit of a name for himself on radio where he played the part of a lugubrious detective in his rich County Antrim accent with the catchphrase “I’m just making wan or two enquiries.”  One day over coffee Billy told me in confidence that he was thinking of trying his luck in England but since nobody with an Ulster accent had succeeded in breaking down the wall of prejudice that surrounded English directors and casting directors, I didn’t think he had much chance.   Sam Kydd from the Donegal Pass was a possible exception.  He had solved the problem by assuming a cockney accent, not just for auditions but also in everyday life.   Back home we waited for news of Billy’s progress but were unaware of the struggle and the privations he was going through.  One rumour that emerged was that he had got a job as a commissionaire in a cinema in Leicester Square where he was spotted by Michael Redgrave.   Another story was that in desperation he had re-invented himself as a Canadian.   After he had found fame he withdrew this story in a magazine called “Picturegoer” and proclaimed himself a proud Ulsterman.
Around this time - the nineteen-sixties – we often met up when he was in London, together with another old friend J.G. Devlin who had also appeared in films directed by John Ford and Walt Disney.  I myself had also found fame in a television series in which J.G., himself a former Group Theatre actor, often appeared.
Stephen for preference would join us for a drink in the club at the BBC’s Television Centre where he was less likely to be pestered by autograph hunters.  There we learned about his famous leading ladies including Gina Lollobrigida, Brigitte Bardot and many more.   One story was that he was to star opposite Elizabeth Taylor in the film “Cleopatra” but due to Elizabeth’s minor illnesses the film was delayed so his agent lost patience and withdrew Stephen, arranging for him to play opposite Sophia Loren in “The Fall of the Roman Empire.”   “Well”, said J.G. with a smile and a shrug, “that’s not a bad swap, Sophia Loren for Elizabeth Taylor.”   Richard Burton was cast as Anthony and the change most likely altered the course of cinema history.
Joe Cushnan’s excellent biography of Stephen Boyd, the forgotten film star and a fellow countryman of mine, fills a disgraceful gap in cinematographic history and should be read by all who are interested in that fascinating subject.

Author’s note: Jimmy Ellis passed away on 8 March 2014 at 82. I had known of his work for decades but only met him in July 2010 when we were contributing to a TV film on Stephen Boyd. He was a generous, gracious and supportive man, offering to write this foreword without any prompt from me. It is one of the pleasures of my life to have spent time in this company.

I'm quite proud of this stuff.