MORRISONS, PLEASE, PLEASE, PLEASE STOP IT WITH THE SCREECHING DIVA 'MUSIC' BLARING OUT OF THE CEILING. IT IS EXCRUCIATING TORTURE AT TIMES AND TOTALLY UNNECESSARY TO THE SHOPPING EXPERIENCE, UNLESS YOU LIKE TO IRRITATE CUSTOMERS, OF COURSE. YOU HAVE GREAT OFFERS BUT I CAN'T WAIT TO GET THE HELL OUT OF THE SHOP - NO BROWSING FROM ME.

THIS SO-CALLED 'MUSIC' MUST BE SELECTED BY SOMEONE WHO IS EITHER HARD OF HEARING OR WEARING EAR PLUGS. THIS SOMEONE IS OBVIOUSLY A HUGE FAN OF LUNG-BUSTING SINGERS, MOSTLY FEMALE, WHO RELISH THE CHALLENGE IN ANY SONG TO ATTEMPT THE HIGHEST NOTE POSSIBLE. THESE SHRILLERS AND SHRIEKERS MUST RATTLE AND WEAKEN THE SHOP'S FOUNDATIONS, FOR THEY CERTAINLY RATTLE MINE. I HAVE MENTIONED THIS EARDRUM DRUBBING DIN BEFORE ON FEEDBACK FORMS AND IN THE SHOP AND RESPONSES HAVE BEEN PRETTY MUCH: "SORRY ABOUT THAT. WE'LL SORT IT OUT." WHAT HAPPENS? NOTHING, NADA, ZILCH!

SO NOW I DO TOP-UP SHOPPING IN THIS SUPERMARKET/DISCO INSTEAD OF FULL SHOPS.

BUT, REGARDLESS OF THE GREAT OFFERS AND CHOICE, EVEN THE TOP-UP SHOPPING MAY BE ABANDONED.

It will soon be April Fool's Day and I've been thinking of some of the attempted tricks played on me and others over the years, certainly on 1 April but at other times too.

When I first moved to England in 1976, a few people tried to take advantage of this young, green lad from Belfast. It really was a time of relentless Irish jokes, with more than a few people testing me by shouting out Pat, Paddy or Mick to attract my attention and to entertain other employees. Of course, being young and a bit shy, I soaked most of it up until I gained enough courage to sling a few remarks back at them. The assumption amongst some pathetic work colleagues was that I and all of my fellow countrymen were thick as pig droppings. Things weren't helped by a plethora of club comedians on TV churning out daft Paddy jokes, including our own Frank Carson.  It was the way it was. By and large it was harmless, if tiresome and annoying after a while.

It was also a time of terrible atrocities and suspicions about anyone with an Irish accent. Whatever part of Ireland you were from geographically, we all carried a target on our backs for jokes, jibes or insults. In my case, it never got out of hand but occasionally there was more than a little menace in the supposed humour.

Thinking about those days when I moved to Manchester brought back memories of two women, one a deputy manager and the other a department manager. They were friendly colleagues and took a shine to me but they were cheeky devils in disguise.

Both Mary and Maureen would think it hilarious to ask this greenhorn to go to the hardware shop next door and buy a glass hammer or go to the store handyman to ask him for a bucket of steam to clean the clothing racks or find a couple of sky hooks to hang a sign. They thought it hilarious to encourage someone to find a left-handed screwdriver or order a new bubble for a spirit level. I recall one time a maintenance man apologising for his lateness by saying that he had to stop off to purchase a new bag of sparks for his welder.

All of these and more are as old as the hills but, in 1976, I hesitated at the first bizarre requests, thinking things through and finding it odd that Mary and Maureen were trying to stifle a fit of the giggles.

Oh and one other thought comes to mind. After school, I worked in a chip shop. The head cook told me a few dos and don'ts including the importance of only using cold water to put out a fire. "DO NOT USE HOT WATER!" Sound advice, I thought at the time. But why was he smirking?

60 years ago, 1 April 1957, the BBC, Panorama and Richard Dimbleby spun us the "spaghetti tree" yarn

THE DEVIL'S DICTIONARY BY AMBROSIA BIERCE 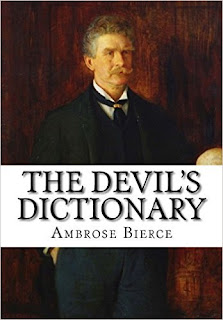 From The Devil's Dictionary by Ambrose Bierce (published 1911):

Vote: The instrument and symbol of a freeman's power to make a fool of himself and a wreck of his country.

Politics: A strife of interests masquerading as a contest of principles. The conduct of public affairs for private advantage.

Politician: An eel in the fundamental mud upon which the superstructure of organised society is reared. When he wriggles he mistakes the agitation of his tail for the trembling of the edifice. As compared with the statesman, he suffers the disadvantage of being alive.

Presidency: The greased pig in the field game of American politics.

President: The leading figure in a small group of men of whom - and of whom only - it is positively known that immense numbers of their countrymen did not want any of them for President.

Idiot: A member of a large and powerful tribe whose influence in human affairs has always been dominant and controlling. The Idiot's activity is not confined to any special field of thought or action, but pervades and regulates the whole. He has the last word in everything; his decision is unappealable. He sets the fashions of opinion and taste, dictates the limitations of speech and circumscribes conduct with a deadline.