CLIFTON WEBB, EWEN MONTAGU & THE MAN WHO NEVER WAS 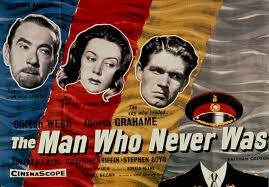 Today, in 1966, we lost actor Clifton Webb at 76.  He had a long, distinguished and successful career. When I see his name, I am reminded of The Man Who Never Was, the 1956 film that gave Stephen Boyd his big break. 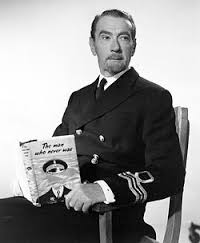 Webb played Lt. Cmdr. Ewen Montagu, the genius behind Operation Mincemeat, a Second World War plan that fooled the Germans.  Montagu was very helpful to me and it his him I want to talk about here.

This is an extract from my book, Stephen Boyd: From Belfast To Hollywood: 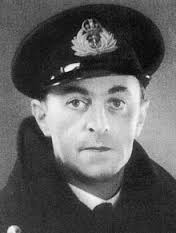 Montague himself was a very interesting man and he gave me personal insight and assistance in the writing of this chapter in Stephen Boyd’s career, even entrusting me with the loan of his personal copy of the screenplay.

The second son of the second Baron Swaythling, Montague was educated at Westminster, Harvard and Trinity College, Cambridge.  He was called to the bar in 1924 and took silk in 1939, and became a successful judge, albeit with a sharp tongue and an impatience to not suffer fools gladly.  At one judicial session, he proclaimed that half the scum of England was going into the Merchant Navy to escape military service.  Later, he apologised for his comments, but, probably knowing that his controversial words had made their point.   His book, “The Man Who Never Was”, has sold over two million copies since publication.  It’s contents include details of specific events that had occurred ten years earlier during the Second World War.

Montagu worked in the Naval Intelligence Division of the British Admiralty.  In the summer of 1942 he was largely responsible for the conception of a tactical plan that eventually tricked the German High Command into believing that the Allied invasion of Europe would come through Greece instead of Sicily.  Lord Ismay, Chief of Staff to Winston Churchill during World War II said that to mystify and mislead the enemy has always been one of the cardinal principles of war and Montagu clearly believed that too.

His plan was called Operation Mincemeat.  The idea was macabre to say the least.  An anonymous corpse dressed as a Royal Marine officer, given the false name of Major William Martin and equipped with bogus “top secret” documents was to be launched from a submarine off the coast of Huelva in Spain and allowed to drift onto the shore.  There were many months of painstaking work to develop the plan.  One of the biggest problems was to find a body and then to prepare it to look as if it had drowned. After years of classification and mystery, the likely choice of the corpse has been revealed by Ben MacIntyre, in his book “Operation Mincemeat,” as Glyndwr Michael, a Welsh vagrant who died on the streets of London in January 1943.

At the time, Montague and his cohorts spun the story that a young man who had died recently from pneumonia had been identified as suitable.  It was said that his family granted permission for his corpse to be used in this strange strategy.  The mixture of fact and fiction in this tale was to re-emerge in the film.

At Huelva, it was known that an active Nazi agent lived and worked on that part of the coast and that he would make it his business to obtain copies of the “top secret” documents that would then be passed to Berlin.  The grim, dubious, highly ludicrous but ultimately brilliant plan was implemented and it all worked beautifully.  German military manoeuvres were delayed sufficiently to give the Allies an advantage.

Ewen Montague summed up his delight:

Not long after publication, the film rights were acquired by the legendary Sir Alexander Korda for his London Films company.  A screenplay was prepared by an American writer and was subsequently ditched as unsatisfactory.  A second adaptation was commissioned giving writer Nigel Balchin the opportunity to produce a script that was fresh, gripping and faithful to the facts.  Montague, pleased about the plans for a film of his work, told me:

“I used to be a frequent cinemagoer and I always tried to follow Stephen Boyd’s career as, according to the press at the time of “The Man Who Never Was”, that was his first big chance – so I felt a semi-paternal interest.  I only met him briefly at the preview although I was on the set several times and, indeed, took the one-line part of the Air Vice Marshall who, at the Deputy Chiefs of Staff conference blew cold water on the plan.

In common with masses of cinemagoers around the world, as well as viewers of TV in many countries, I thought the film really brilliant.  There had been a disastrous script by an American writer.  Nigel Balchin then did a completely fresh and different one (I think that it was also his first big chance).  Before starting on it he had a talk with me and pointed out that it was necessary o bring in some “action” as the actual operation was virtually static.  So we agreed on a slip that we planners could have made, which would have given any enemy investigators a lead-in, and on what sort of agents the Germans could have used at this stage of the war.  It would probably have been a neutral diplomat (but that would have limited the number of countries in which the film could have been shown without governmental trouble) but it was just possible that they would have used an in-and-out Irishman.  He then concocted the brilliant film in which there was much that did not happen, but nothing that could not have happened – unlike most spy films.”

Clifton Webb played the part well, in a stiff-upper-lip fashion, perfect for the storyline.  The plan to dupe the Germans was risky and it needed a clear-thinker, focused and determined to see it through. Ewen Montague died at 84 in 1985.

Stephen Boyd: From Belfast to Hollywood