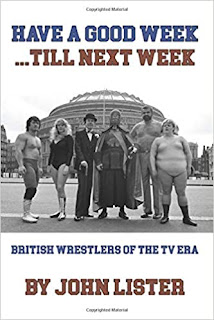 Have A Good Week… Till Next Week

British Wrestlers of the TV Era

For six years, the stars of Britain’s ITV wrestling told their stories to Fighting Spirit Magazine’s John Lister. Now these in-depth biographies of more than 50 grapplers come together in the ultimate history of the ‘World of Sport’ era. From Adrian Street to William Regal, from Tiny Tom Thumb to Giant Haystacks, these are the true stories of amazing lives in and out of the ring.

John Lister is a professional freelance writer who has been writing for wrestling publications since 1990. Author of Slamthology, Turning The Tables: The Story Of Extreme Championship Wrestling, and Purodyssey: A Tokyo Wrestling Diary, he formerly worked for Power Slam and The Fight Network and is now a regular contributor to Fighting Spirit Magazine.

It is around 1964.  I was ten-years-old.  Most Saturdays I would take the bus on my own (it was a different era) to Belfast city centre and walk all the way to the New Lodge Road to visit my Granny Rachel’s house and Aunt Sally’s next door.  They were sisters.  I have many fond memories of those trips and visits but one in particular stands out.  My Aunt Sally was a constant cook and she loved watching professional wrestling on television.

I recall a big bowl of marrowfat peas, generous amounts of salt and vinegar, thick slices of bread lathered with butter and a big blue-striped mug of what is now known as strong builder’s tea, all consumed while watching the wrestling.  Aunt Sally, every now and then, passing from living room to scullery and back again, would shout or shake a fist at some villainous grappler, while commentator Kent Walton described the action.

John Lister has written a fabulous and fascinating history of the glory days of British television wrestling, 1955 to 1988.  Have a Good Week… is a collection of wrestler profiles, some I remember very well, others knew to me.  The book provides insights into the lives of wrestlers and the world of wrestling, the individuals trying to find their niche and promotors’ dealings behind-the-scenes.  It was a world of sometimes gruelling tour schedules, piss-poor wages for several grapplers, pre-arranged bouts, friendships, rivalries, heroes and villains, all in the name of entertainment, and it was an extremely popular sport.  This was before the hyper-showbiz, super-athletic, epic US-style of wresting that, at heart, was and is high-octane pantomime stuff.

I can’t forget the flamboyant Adrian Street, camp but skilled in the ring, booed, hissed at and cheered depending on his performance.  Big Daddy was an audience favourite, not the greatest advertisement for body/mass ratio, who depended mostly on size and weight to crush opponents.  His most famous opponent was the truly enormous, Giant Haystacks, who like his rival, often flattened the poor souls trying to topple him.

Away from the mountain men, there were fit and fast athletes who could demonstrate quick and efficient moves, much to the delight of audiences.  There were also those out to inject some comedy into the matches and others who were downright dirty players, getting up all sorts when the referee wasn’t looking.  Promotors tried to keep their wrestling bills mixed to keep audiences attending and viewers watching.

I am reminded of some of the great names from those heady days; Brian Maxine, Catweazle, Jackie Pallo, Mick McManus, Jim Breaks, Johnny Saint, Kendo Nagasaki, Les Kellett, Mark Rocco, Mike Marino, Pat Roach, Marty Jones and so many more.  I would have liked more on Bert Royal and Dave Finlay, but there is more than enough history and nostalgia in this book to satisfy any fans of wrestling on TV way back when.

John Lister is to be applauded for this collection, riveting and compelling, a fine history of a sport that attracted millions of TV viewers every week.  This is a superb book for wrestling fans but it should appeal to a wider audience of general sports fans for its revelations of real iife outside, trying to earn a crust.