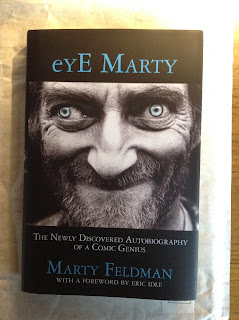 Marty Feldman was born on 8 July 1934 and died after a heart attack on 2 December 1982, aged 48. This autobiography was discovered 30 years after his passing. “None of his writing has been changed and all of his attachments have been included,” says Mark Flanagan, trustee of the Marty Feldman estate.

“I can never see myself as an old man, not because I don’t want to but because I just don’t feel my distance will be that far.”

I must admit I had forgotten about Marty Feldman but as soon as I was aware of this book and saw his distinctive features on the cover, a lot of very fond memories came flooding back.  His wild and crazy TV shows were, in the main, big hits and at least half of his ten or so films were popular successes. He was always a writer first and then a reluctant performer when he was encouraged to take centre stage.

Marty Feldman was the son of Jewish immigrants and saw himself as a solitary child, a sort of odd-one-out as a kid in the war years when he, the city boy from the East End of London, was farmed out to country families as an evacuee. He left school at fifteen and worked in a Margate funfair before getting the showbiz bug writing and performing as part of a whacky variety trio. He developed a huge love for jazz and in his early years as a budding musician, he was considered to be the worst trumpet player in the world. His passion to learn and his devotion to jazz kept growing throughout his life. He got some gigs with bands and made some money but, more often than not he would have no idea where he was going to sleep or what he was going to eat on any given day or night. But, it seemed, nothing was going to get in the way of his independent spirit.

He had the good fortune to meet, befriend and eventually collaborate with Barry Took, the two occasional performers finding their niche as a brilliant writing team. They wrote for “The Army Game” and “Bootsie and Snudge” on television and “Round The Horne” on radio.
Marty Feldman became script editor on “The Frost Report” and one of his many classic sketches involved John Cleese, Ronnie Barker and Ronnie Corbett doing the famous “I look down on him, I look up to him” sketch. He was firmly part of the group that became Monty Python and included John Lennon, Harry Nilsson and Ian McShane amongst his closest pals.

His TV career as writer/performer hit gold with “Marty”, a series of sketches and was followed up with more of the same, pacy, crazy and very funny shows loved by millions. (There’s a ton of Marty Feldman stuff on YouTube.)
He moved to Hollywood with his wife Lauretta, “the love of my life”, and first with Gene Wilder and then with Mel Brooks, he found a new lease of life as an actor and a new level of fame worldwide in movies. He liked Los Angeles but found out fairly quickly that you are only as good as your last film’s box office receipts. His most famous role was as Igor (pronounced Eye-gor) in Young Frankenstein. He also featured in “The Adventure of Sherlock Holmes’ Smarter Brother”, “Silent Movie” and “The Last Remake of Beau Geste”. He died during the production of the pirate film “Yellowbeard”, a project that included his friends Graham Chapman, Peter Boyle, Peter Cook, Eric Idle and many others. His body was laid to rest in the Hollywood Hills Cemetery in a grave close to that of his comedy idol Buster Keaton.

This is a beautifully written book with a flowing narrative style, descriptive, funny in parts and told from the heart. Occasionally, the flow is paused for poems about love and life with all its distractions, foibles and beauty. On the whole it is a happy autobiography but it is difficult not to read it without a degree of sadness now that Marty Feldman is no longer with us. Towards the end of the book he gets more reflective about politics, religion and the absurdities of life. But the overriding features of his story are twofold; he was happy in his own skin as a clown and he loved his wife Lauretta to bits.

It is amazing and wonderful that Mark Flanagan not only found this book but also that he ensured it was published as a lasting tribute to Marty Feldman, a journeyman writer whose life’s path took him from the golden age of radio comedy in the 1950s to the British comedy explosion in the 1960s to the heights of Hollywood in the 1970s.

It is not exaggerating to say he was unique.

BOOK REVIEWS - HOW MANY VIEWERS?

I started this blog in mid-2011 and I have posted all sorts of things on here, starting with poetry and developing into some opinionated stuff and other diversions. But lately, I have enjoyed posting my reviews of interesting books, non-fiction mainly but occasional fiction gets a look in.

In the Top 10 most popular posts, there are 5 book reviews and here they are with the total number of views as of today, 30 March 2016:

The Seven: The Lives And Legacies Of The Founding Fathers Of The Irish Republic (First posted 25 March, 2016 - 193 views)
http://droppedthemoon.blogspot.co.uk/2016/03/book-review-seven-by-ruth-dudley-edwards.html

It was a pink pill, or it might have been blue,
swallowed with a shot of something electric,
and then nothing for a while until the pretty girl
sitting on the armchair opposite became a warty hag.

There was no spinning room, just wavy lines,
exaggerated furniture and a red rose watching me
from the ceiling. I heard footsteps, unoccupied shoes
crossing the shifting floorboards, and a paper bag

flew around like a carefree dove with time to kill.
The hag’s eyes drooped, her neck flesh hung
like stretched dough.  I opened my mouth to speak,
interrupted by walls breathing asthmatically in and out.

The air turned crimson and then yellow, colours alternating
with each blink and a dancing bear performed Mr Bojangles.
I felt no fear, no concern, no surprise, had no idea where I was
but of wanting to sway and dream in those moments, I had no doubt.

Time undefined passed and I opened my eyes to a still room,
everything back to where it had been before the magic pill
and there, asleep in an armchair opposite, I saw the prettiest angel,
the one missing from my adventure, there with rose petals at her feet.

And in the corner of the room, an LP on repeat play, Sammy Davis Jr,
effortless, cool as I felt at that moment of awakening, easing along,
recapping what I think I’d done: “He’d jump so high, yes he’d jump so high,

POEMS FOR A PAMPHLET

I've been working on a sequence of 20-line poems loosely on the themes of reading, writing and books, trying to get enough together to submit for consideration as a pamphlet. I'm getting there, I think. I need at least 12.

Here are the titles of the first 11:

A Warning To Writers
An Essay That Mr Sadler Liked
A Poem Learned By Heart
A Letter To The Editor
A Western Novel
A First Bookcase
An Annual Every Christmas
A Primary School Report
A Postcard From A Well-Known Poet
A Library Destroyed By Fire
A Newspaper Hidden Under The Settee Cushion
&
The 12th poem:
A Letter From Liz & Gerry

I keep going over them, reading aloud, checking the rhythms and trying for some rhyme here and there but hoping it doesn't sound forced.

The tinkering and adjusting never really stops until the poems are sent off and even then I'll go over them and wish I'd done this or that in a line.

But, it's fun, and that's the important thing. 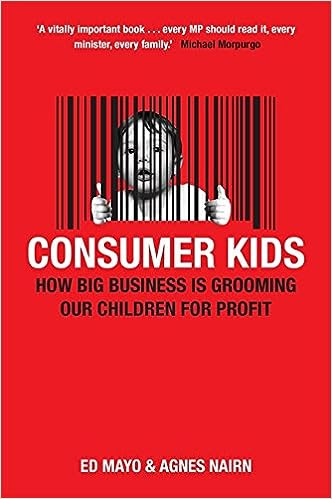 My review of this book dates back to early 2009 and it was published in Tribune magazine. I found it again and thought, seven years on, the commercial grooming business is more rampant than ever with apps and other technological gadgetry for this, that and the other. You might find it interesting.

“CONSUMER KIDS: How Big Business Is Grooming Our Children For Profit”
by Ed Mayo & Agnes Nairn

This a heady work railing against the growing menace of junk mail, junk food, junk drink, junk entertainment and junk culture.   The no-nonsense agenda for the book is illustrated on the front cover – a child behind a barcode designed to look like a prison window – and the book itself makes no bones about its intentions to expose the many commercial practices that see children from very young ages to teenage years as crucial players in a gold-rush marketing battle for their hearts, souls, minds and money.  In a thoroughly researched and argued thesis, we are steered through the influences of pester-power and peer-pressure and the opportunities therein for marketing manipulation that exploits kids’ desire to be cool and exposes the weaknesses of parents who give in too easily to their temperamental, demanding children.  To marketing campaigners children are wonderful sales people, powerful conduits to other children.  When the children’s market is estimated at £99 billion, companies, or “child catchers” in the book’s terminology, want to feast on lucrative slices of this profitable cake.

The paraphernalia of technology – mobile phones, internet, MP3 players, multi-channel television - and slick reality, fashion and lifestyle media output give advertisers many pipelines to young people in particular. It is a marketing world spiced up with sexual connotations and the creation of desires to be as rich, successful and perfect as the stars of movies, television, music and sport.  Kids are suckered into it and companies in their quest to win more customers and to increase market share, see the young market as a legitimate target to capture for business security and longevity.

The book is littered with alarming information.  For example, children’s bedrooms have been transformed from places to sleep into hi-tech, intensive media bedsits. It is said that about a quarter of each child’s day is devoted to switching on and interacting with machines from mobile phones to TVs to computers, and that the commercial world dominates children’s time more than ever. The enticing worlds of fashion, sugar-rich foods, social networking websites, gadget obsession, celebrity exposure and product endorsement, and life itself, as a kind of eternally happy theme park, are, it seems, ripe for exploitation.  Kids are vulnerable, companies know it and see endless opportunities.

This is an important book to be read with an open mind but it might be impossible for business managers not to feel a little soiled and guilty after such an intellectual drubbing.  “Consumer Kids” gives us something substantial to chew on and pokes away at our collective conscience, giving us the choice to surf along with consumerism, to sink beneath its relentless tidal wave or to fight it tooth and nail in the interests of future generations’ responsibility and salvation.
- March 28, 2016 No comments: