A DOZEN QUESTIONS
(13 of however many posts)

This post’s special guest is Brigid O’Neill (“a great songwriter with a voice that can break your heart at 30 paces” – Ralph McLean, BBC Radio Ulster). Although she has been singing all her life, it was with the release of her debut self-penned EP Arrivals and Departures – and the insistently catchy single ‘Don’t Make me Go to Town’ - that County Down-based singer songwriter Brigid O’Neill began to attract the attention of NI's discerning music scene. They were drawn, no doubt, not only by the delicious dash of jazz that she adds to the sweet recipe of country-folk and blues that has become her trademark ‘sound’, but also by the rapid development of an artist who has just set out on her journey. 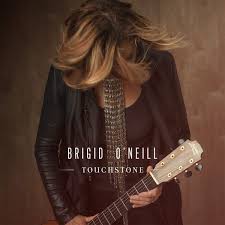 In 2017 she released her remarkable new album Touchstone.  Produced in Belfast by critically acclaimed songwriter, Gareth Dunlop, and mastered in Nashville, this album exhibits the full spectrum of her formidable repertoire.

I blogged about Touchstone and here is the link: https://droppedthemoon.blogspot.co.uk/2017/09/new-music-touchstone-brigid-oneill.html

Having won a prestigious Arts Council of Northern Ireland Artist Career Enhancement Award in 2016, she has sold out shows throughout NI, also opening for and singing alongside stars like Eddi Reader, Duke Special, Frances Black and Mary Coughlan.
A regular visitor to Nashville (where she has performed at the world famous Bluebird Café and appeared on the Music City Roots show) Brigid collaborates there on exciting new material with Grammy-winning songwriters.  Brigid acclaimed first album of covers, Inland Sailor (2002), still gets regular airplay today.

1. What is your favourite word? Spice

2. What is your least favourite word? Vulva (yech!)

3. What turns you on creatively, spiritually or emotionally? Small venues and beautiful music

4. What turns you off? Being indoors too long

5. What is your favourite song? I Can’t Make You Love Me, Bonnie Raitt version

6. What is your favourite film? Pillow Talk

7. What is your favourite curse word? Feck

8. What sound or noise do you love? Rain on a soft top

9. What sound or noise do you hate? Any sustained high-pitched sound (that usually only myself and the dog can hear!)

10. What profession other than your own would you like to attempt? Florist

11. What profession would you not like to do? Bus driver

12. If heaven exists, what would you like to hear God say when you arrive at the Pearly Gates? “Peace, man!”

Brigid O’Neill, thank you for your dozen answers to a dozen questions.