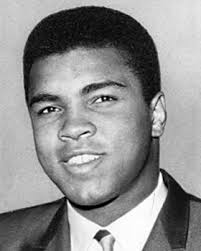 I have never been passionate about sport - any sport. I like to keep an eye on the big occasions and I am more than aware of the celebrity sports people promoted relentlessly these days through the well-oiled PR machine. But sitting through football or rugby matches, grunting tennis games, days of golf and cricket, (don't get me started on cricket)........ yaaaaawwwwwnnnnn. I do have a soft spot for motor racing on two and four wheels but sometimes those races can be pretty routine. Generally, I have little time for boxing.

But, when I was growing up in Belfast in the 1960s and into the 1970s, it was impossible not to be swept along by boxing and boxing's greatest ever star, Cassius Clay who became Muhammad Ali. He was a star from way across the Atlantic but he had something special in the way he looked and sounded that lit up the world. In that era of just a few TV channels, no Internet or social media, his presence on screen and on radio was mesmerising. He was scary. Kids don't really like people who shout. He was smug, saying he was the greatest. We were taught not to be smug. He was majestic when he entered the ring and more often than not he was fast and furious in fights, sometimes resorting to rope-bouncing and mind games to unsettle opponents, and he could often predict with magical precision which round would be his winning round. We would all wait for his dancing legs to do the Ali shuffle. I didn't like boxing as a sport but I loved Ali.

Outside the ring, he was intelligent, articulate and funny. He said what he thought and he was more than ready and capable to back it up verbally in the wider world or physically in the boxing ring. His little poems were a delight. "This may shock and amaze ya, but I'll retire Joe Frazier."

He was a campaigner for civil rights, a humanitarian and a man of principle, not always universally liked, not always perfect but for a sizeable proportion of my generation, he was and is a monumental credit to the human race. That might be a bit over the top but when I heard the news of his passing this morning, I felt sadder than I have ever felt about a personality's death.