In 2012, I self-published 'Belfast Backlash', a crime caper. Now, I am re-reading it, revising, tidying and tightening it up to republish in a new edition. 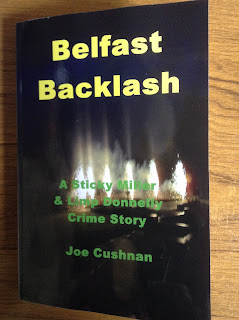 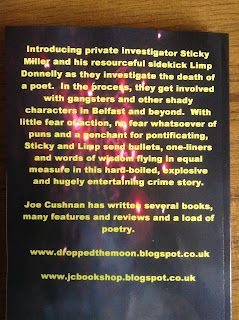 
“I was checking off the names of various characters in my head, ticking and crossing as I went through the litany of all those with whom I had come in contact in the previous ten days; Eddie Hennessy, genius and murder victim; John Devlin, rogue, living out his last days in peace; Bog O’Byrne, thug and now motorway bridge support; Brendan Bertram, sweet old man with enough to say and more to tell; Bingo and P.J., idiots on crutches; Joan Jones, a tragic, lost opportunity to be the love of my life; Steffi Ellerbrock, a beautiful surprise out of the blue; Jackie Strong, infamous piece of scum and still to account for his risible life; Dave Robinson and Billy Strong, dead men walking…………”


Introducing Private Investigator Sticky Miller and his resourceful sidekick Limp Donnelly as they investigate the death of a poet.  In the process, they get involved with gangsters and other shady characters in Belfast and beyond.  With little fear of action, no fear whatsoever of puns and a penchant for pontificating, bullets, one-liners and words of wisdom fly in equal measure in this hard-boiled, explosive crime story.

I'll see how it goes in revision. If anyone is interested in reading or assisting with publication, please get in touch - joecushnan@aol.com