PONDERING WHY THEY MESSED WITH THE BONANZA THEME 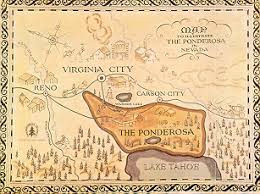 The greatest TV western theme, amongst many of my favourites, is Bonanza. It is not open for debate. As a five or six-year-old kid, I marveled at the burning map and the four riders heading towards the camera. It thrilled me then and it still thrills me now, even though I’m more than ten times the age I was back in that golden TV era for westerns.

The show ran for 430 episodes from 1959 to 1973. Lorne Greene, as Ben Cartwright, was in them all. Michael Landon, as Little Joe Cartwright, appeared 427 times. Big Dan Blocker was Hoss Cartwright, born Eric. He clocked up 415 episodes before his death at 43 in 1972. Pernell Roberts played Adam Cartwright 200 times before quitting the show in 1965. 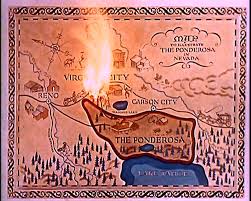 But back to the theme music. The theme was written by Jay Livingston and Ray Evans, arranged by Billy May and orchestrated by David Rose. Rose was asked to write a different theme for the 1970 season and this new piece of music was used until 1972. For the final season – well I’ll let you listen via the link below. It is a murderous crime against the wondrous, brilliant and, to me, sacred original.

And then for the final season, it was decided to return to the original idea but, heaven help us, it was played at breakneck speed, ruining it for diehard fans. (Sorry this video clip is a bit rubbish).

The history is what it is and can’t be changed, but why they dicked around with the Bonanza intro still beggars belief!

If you say: “Ach, it’s only a TV show,” well saloon fights have started for less!

(And just for fun, here's a novelty song by a man called Gurf Morlix, which I think is a double word score in Scrabble. It's called The Dan Blocker Song.) 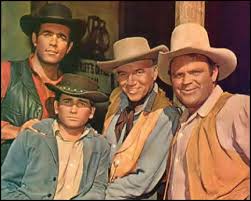