HOW TO BE A POET BY JO BELL, JANE COMMANE 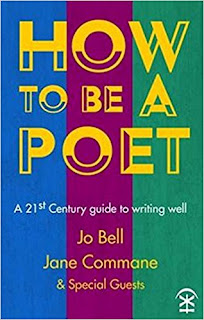 I bought this book and paid the full whack, £14.99. 14 fucking 99. What a stupid price for a book that starts 'Reader, we have got you between the covers on a false pretext. This is not exactly a 'how to' manual.' Bastards. I'm thinking TV's Hustle.

I am a 64-year-old wannabee poet, and wider writer. I need to learn. I want to learn.

This book is a revelation, a teacher, a bully (in the positive sense if that's possible) and a companion with permanent residence in my man-bag.

You get the practical experience of a mouthy (compliment) poet and a seasoned publisher. You get both worlds. You also get guest stars writing stuff that is useful but sometimes highfalutin'.

You get advice on writing, reading, editing, drafting, preparing to get published, getting published, not pissing off editors, impressing editors and all the ballyhoo.

I like this book a lot and I will refer to it many times when I try to write decent words and phrases.

If you are in this world of a wonderful writing arena, find a copy and be prepared to soak up a wealth of experience ...... and to get your ass kicked.

FREELANCE WRITING - WHAT I'M UP TO

Since retiring from a near 4-decade retail management career including BHS, Alfred Dunhill, Makro, Asda and Frank Thomas (motorcycle gear), I have devoted a considerable amount of time to freelance writing.

I have had a good run as a radio, book and occasional TV/theatre reviewer for Tribune magazine, thanks to the kindly and receptive George Osgerby.

I have had several features published in the Belfast Telegraph, thanks to the encouraging editor Gail Walker. Other journals have carried my work but none more so than the Bel Tel. Forever grateful. I have written nostalgic pieces and a few personal ones about my family. They have been well received.

I have had a book published about my retail career, Retail Confidential, and one about the Belfast-born 1950s-70s film star Stephen Boyd, he of Ben Hur and The Fall of the Roman Empire, amongst many others. I have self-published some others that could fall under the heading 'humorous'.

I have been writing and pitching a book about my father who, in 1960, left our Belfast home, his wife and seven young children and vanished. The Arts Council of Northern Ireland awarded me support funding to investigate my father's 'missing' 22 years and that story and potential book is still alive and kicking and being considered by experts in the publishing business. Has Anybody Here Seen Kelly? is the title.

This story has attracted the attention of BBC Radio Ulster, BBC Radio Sheffield and BBC Radio 4, the most recent example is my appearance as a guest on Saturday Live with Aasmah Mir and the Reverend Richard Coles. I think the iPlayer link is still live - http://www.bbc.co.uk/programmes/b09rwtg8

I have written a crime thriller called Belfast Backlash featuring a duo, PI Sticky Miller and his sidekick Limp Donnelly. I think it has legs. I have a sequel idea burning away.

I have a 'holiday' project, a screenplay for a western called Seven Pouches. It's slow but getting there, pardner.

I continue to attempt poetry and, more recently, flash fiction, aspects of 'quick' literature that suit me. I have two stories published online at Fairlight Books and hopefully that strand of my writing will continue.

I do not rely on freelance writing to earn a living, so every opportunity to write, every commission, every invitation, every royalty is a bonus. I love doing it.

If you want to say hello or would like to commission some writing, I reside at joecushnan@aol.com.

Subjects on the back burner:

My 4 years as an examinations invigilator
My Granda Tommy Millar
Eavesdropping - collecting snatches of everyday conversations
Soaps - how on earth do they get away with grim storylines on primetime TV?
Tips, tipping and service charges - don't get me started!
Numerous themes for poetry collections
and others.

I watched others, cockier than me,
Shout themselves to the forefront,
Individuals at pitch volume
Like honking geese leading the V-pack,
Observing, sometimes jealously,
Their chutzpah, their certainty,
Wanting to but not having the guts
To plug myself in to a higher voltage.