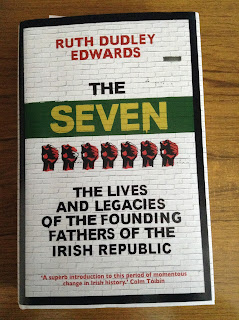 The Seven: The Lives and Legacies of the Founding Fathers of the Irish Republic
by
Ruth Dudley Edwards
OneWorld
2016

“The odds are a thousand to one against us…. If we win, we’ll be great heroes; but if we lose, we will be the greatest scoundrels the country ever produced.” James Connolly

“We have preserved Ireland’s honour and our own. Our deeds of last week are the most splendid things in Irish History. People will say hard things of us now, but we shall be remembered by posterity and blessed by unborn generations.” Patrick Pearse

I was born and raised in Belfast. I lived there, was educated and worked there for more than two decades. My family background is Catholic, I was educated at a Christian Brothers school and I know bits and pieces of Irish history, infused (or perhaps confused) by rebel songs, some boisterous, some romantic, some sickly sentimental, and amateur recollections of historical happenings. I can remember occasional discussions about the 1916 Easter Rising and other episodes as well as exchanging casual opinions on some of the famous people who lived and died for their causes. I knew of Patrick Pearse and James Connolly but none of the other key players. I cannot remember being formally taught much, if any, Irish history. My knowledge could be summarised by saying that the British/English did some terrible things and the Irish did some terrible things too. In other words, regarding Irish history, I was as shallow as dishwater, that is until I read ’The Seven: The Lives and Legacies of the Founding Fathers of the Irish Republic’ by Ruth Dudley Edwards.

I expected the book to be detailed because recently I read ‘Newspapermen’ by the same author, a thorough account of Fleet Street barons and I wasn’t disappointed. In addition, I heard that Ruth Dudley Edwards is not everyone’s cup of tea, that she likes a debate and that, regarding Ireland, that land of perpetual disagreement, she is not afraid to express what she knows and say what she thinks. Thus, a further expectation was that she would not pull any punches in her accounts of the seven significant men in one of Ireland’s most dramatic historical periods. A browse on social media confirms that she attracts controversy and a fair amount of abuse but she seems to be well able to take criticism as well as dish it out. Of course, she has supporters too.

So, I came to this book wanting to know more about Ireland before, during and after 1916 and what inspired and influenced individuals to devote themselves to a cause or variations of a cause. I also wanted to join the dots, as it were, to see how events 100 years ago relate to today’s Ireland with its divisions, disagreements and ongoing troubles. I came to the book as an apolitical layman, neither an academic nor a historian.

Ruth Dudley Edwards takes us through the lives and motives of Thomas J. Clarke, Sean Mac Diarmada, Eamonn Ceannt, Patrick H. Pearse, Thomas MacDonagh, Joseph Plunkett and James Connolly, all of whom signed The Proclamation of the Irish Republic at Easter, 1916:

IRISHMAN AND IRISHWOMEN: In the name of God and of the dead generations from which she receives her old tradition of nationhood, Ireland, through us, summons her children to her flag and strikes for her freedom.

Having organized and trained her manhood through her secret revolutionary organization, the Irish Republican Brotherhood, and through her open military organizations, the Irish Volunteers and the Irish Citizen Army, having patiently perfected her discipline, having resolutely waited for the right moment to reveal itself, she now seizes that moment, and, supported by her exiled children in America and by gallant allies in Europe, but relying in the first on her own strength, she strikes in full confidence of victory.

We declare the right of the people of Ireland to the ownership of Ireland, and to the unfettered control of Irish destinies, to be sovereign and indefeasible. The long usurpation of that right by a foreign people and government has not extinguished the right, nor can it ever be extinguished except by the destruction of the Irish people. In every generation the Irish people have asserted their right to national freedom and sovereignty; six times during the past three hundred years they have asserted it in arms. Standing on that fundamental right and again asserting it in arms in the face of the world, we hereby proclaim the Irish Republic as a Sovereign Independent State. And we pledge our lives and the lives of our comrades-in-arms to the cause of its freedom, of its welfare, and of its exaltation among the nations.

The Irish Republic is entitled to, and hereby claims, the allegiance of every Irishman and Irish woman. The Republic guarantees religious and civil liberty, equal rights and equal opportunities of all its citizens, and declares its resolve to pursue the happiness and prosperity of the whole nation and of all its parts, cherishing all the children of the nation equally, and oblivious of the differences carefully fostered by an alien government, which have divided a minority in the past.

Until our arms have brought the opportune moment for the establishment of a permanent National Government, representative of the whole people of Ireland and elected by the suffrages of all her men and women, the Provision Government, hereby constituted, will administer the civil and military affairs of the Republic in trust for the people.

We place the cause of the Irish Republic under the protection of the Most High God, Whose blessing we invoke upon our arms, and we pray that no one who serves that cause will dishonour it by cowardice, inhumanity, or rapine. In this supreme hour the Irish nation must, by its valour and discipline and by the readiness of its children to sacrifice themselves for the common good, prove itself worthy of the august destiny to which it is called.

Signed on behalf of the Provisional Government,

Each man’s story is told in impressive detail - family backgrounds, education, employment, travels, political leanings, literary and religious influences et al and related in an easy-to-read narrative that maintains interest throughout, unlike a stuffy textbook. I must say though that I needed a mental flipchart to keep tabs on the various characters entering and exiting the stories but, by the end, the important relationships were clear enough.

There is little doubt that the seven men were committed to their individual beliefs and dedicated completely to their collective cause – Ireland free from British rule. It is right to acknowledge their determination and, depending on your own assessment, to admire their vision, ideals and ultimate sacrifice. Whether or not you side with the seven, what is the point of leading or following a cause if you are not prepared to see it through?

Ruth Dudley Edwards explores how such individuals, some placid, some mercurial, all well-read and intelligent, came together to drive their attempt at revolution. Her critics might be able to ferret around the text and pick out examples of negative descriptions or exaggerated assumptions or a lack of sympathy for the men and their associates but I did not detect anything in the reading that made me feel that I was being manipulated to lean one way or the other. I sensed a degree of fairness in the portraits, giving credit or criticism when due and had no inkling that there was any blatant attempt to condemn who the men were and what they tried to do. Honest appraisal by its nature exposes the good, the bad and the ugly.

This is a book about heroics to some and foolishness to others. It paints a picture of Ireland, the Irish and these seven individuals in graphic detail, illustrating depression, discontentment and destitution across the country. It underlines the determination of a few intellectuals to influence their followers via barnstorming speeches, political writings and poetry, and when words were deemed not to be enough, they evolved into military strategists.

The penultimate chapters – No Turning Back and Last Act – are powerful and superb in describing the action on Dublin’s streets and the disintegration of the collective effort to win the battle.  The accounts of the closed trials, the absence of legal support, the death sentences of the Seven and others and the mental images of men executed by firing squad, chill the soul. They all faced the same charge and all met death in the same way, proud to the last. Their bodies were buried in unmarked graves.

They became icons. They became martyrs. And they lit a fuse. They inspired other individuals and groups over the 100 years since 1916 to keep the original cause – Ireland free from British rule – alive through passionate politics and bloody violence.

No doubt, as the Easter Rising and its leadership are sensitive and, perhaps, sacred subjects, some will read and hate this book and others will love it for various reasons. The Seven have achieved legendary status in certain quarters and, whilst there is much to say in their favour – intellect, talent, resolve, patriotism – there is much to ponder about their abilities to put their considerable political and military theories into practice.

For this reader I found it an excellent resource filling in some considerable gaps in my knowledge of Irish history. I understand why the Seven did what they did, why they did it and why there is a massive reverential tone when their names, actions and manner of their deaths are mentioned. I also joined the dots to clarify the connection between then and now (thanks to the helpful final chapter, Legacies). I lived and worked in Belfast in the 1970s, surrounded by The Troubles, that time of sectarian hatred, murder, injury, grief and fear that still simmers under an uneasy peace, manipulated by fickle, stubborn politicians.

Ruth Dudley Edwards has helped me see the past and much of the present more clearly in a thoroughly engrossing book that, I think, given a fair assessment by believers and non-believers, should be read widely.