An article of any length based on the contents of this blog post is open for commissioning. Contact: joecushnan@aol.com


Michael Portillo, in his television train journeys shows, carries around his Bradshaw's Guide of railway timetables and travel notes, to compare modern trains and travels to days of yore.

It has struck me on more than one occasion that a series could be developed, based on Cathal O'Byrne's entertaining book As I Roved Out, to seek out places and stories of interest throughout Belfast's history. As I Roved out was first published in 1946 by the Irish News, and reprinted in 1982 by The Blackstaff Press. It's full title is As I Roved Out: A Book of the North - Being a Series of Historical Sketches of Ulster and Old Belfast. So, for the next few blog posts, I will dip into the book and highlight some of the stories within. I was born and raised in Belfast and O'Byrne's tales and recollections have always informed and entertained me.

A reference to A Tale of Two Cities by Charles Dickens catches my eye. It refers to a character called Jerry Cruncher of Hanging Sword Alley, Whitefriars, London, who works as a bank messenger by day but operates as a 'resurrection man' at night. That term is a disguise for 'body-snatcher'.  It was a lucrative business. 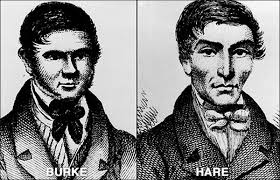 In a paragraph that mentions the notorious duo, William Burke (from Urney, Co. Tyrone) and William Hare (possibly from Newry or thereabouts), both of whom moved to Edinburgh, an anatomy lecturer paid £7 10s for one body.

With the rise in medical schools, the demand for corpses increased, and demand always outweighed supply, so high cash settlements were guaranteed. For those who dared to rob graves, it was easy money. Burke and Hare, and probably others, turned to murder to keep up with requests for fresh
corpses. 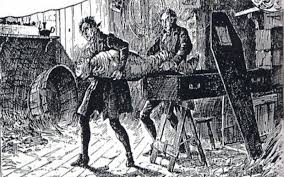 Burke and Hare at work

In Belfast and elsewhere, it was not uncommon for relatives to keep watch through the night on the graves of recently deceased family members. It seems no one bothered much keeping an eye on the plots of hanged murderers and other criminals, but many innocent souls were guarded. For a time, the watchers were armed with guns but there were many complaints from graveyard neighbours about noise and from relatives that tombstones were being damaged by stray bullets. Some watchers were accompanied by dogs ready to pounce on would be snatchers. It was fairly common for graves to be guarded until decomposition made bodies valueless.

Cathal O'Byrne quotes a form issued by the Old Poorhouse in Clifton Street, Belfast to be signed by anyone appointing a watcher:

'I hereby engage to be responsible for the conduct of ______ sent by me to watch the Remains of ______ in the burying ground belonging to the Belfast Charitable Society, and to make good to the said Society any damage which may be done by him, or any of them, during the period of their watching tombstones or otherwise.'

The quirky lexicographer, Ambrose Bierce, in The Devil's Dictionary defines 'body-snatcher thus: 'One who supplies the young physicians with that which the old physicians have supplied the undertaker.'

Body-snatching was an obscene crime endorsed by those 'respectable' medics who were prepared to stump up cash for corpses. The 'trade' diminished over time but grave robbing continues in various parts of the world to this day.

In A Tale of Two Cities, Jerry Cruncher, irritated by his wife's praying for him, eventually renounced his life as a resurrection man. Burke was hanged on 28 January 1829 and his body dissected publicly in a college anatomy theatre. Hare was released from custody and eventually vanished, never to be seen again.
- February 07, 2019