Readers may or may not know that I am researching and writing a memoir about my father, but it also concerns my mother, my family and growing up in Belfast in the mid-1950s/1960s. 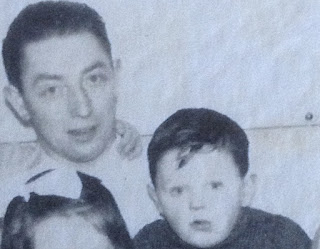 The memoir has been support-funded by The National Lottery through the Arts Council of Northern Ireland, support for which I am eternally grateful. I will see this manuscript through to its conclusion.

The working title is: 'Has Anybody Here Seen Kelly?'

In 1960, my father, John Cushnan, left our Belfast home, his wife and seven children and vanished. The next we heard of him was when we were told he had died at 57 in 1982 in Clapham, London. 22 'missing' years, in which he reinvented himself as John Kelly from Derry.

It is a project that is alive and developing well. Recently, I have enlisted the help of a professional editor, so anything I wrote pre-2017 has been reassessed and rewritten, developed and the word count, the territory I have not been aware of until this year has been explored tirelessly. In two months, thanks to this guidance, my words have doubled.

To balance my own perspective of growing up in Belfast, I invite my fellow Belfast folks in their early to mid-60s to think of at least 10 things they remember about being kids and teenagers in our city.

Start with the two words: 'I remember' ..... and think about family, friends, school, food, hobbies, playing outside, holidays ...... anything, anything at all about yourself and your reminiscences.

As a bonus, if anyone can recall anything about my family, the Millars and Killens (New Lodge Road), the Cushnans (Bingnian Drive, Andersonstown), then please include that.

If you go way beyond 10 memories, so be it. Keep going.

All I can offer is your 'guest star' appearance in my memoir. If it is ever published as a book, you will be acknowledged and will beam with pride, and I will send you a signed, personal, complimentary copy.

If you know me or don't know me, but you are a fellow Belfast 60+ kid, please get in touch
via joecushnan@aol.com