In Belfast last week, we stayed at the Europa Hotel. One morning while studying the form of the buffet breakfast, a lady turned the corner and we exchanged hellos. She looked familiar. We were at the orange juice stage of the morning. On my return to compile a hearty breakfast plate, there she was again and by now her name had clicked. "Are you Gwen Taylor?" I asked. "Yes,"she nodded. I did the 'I love your work" thing and I meant every word of it. She was in Belfast to star in The Importance of Being Earnest at the Grand Opera House. 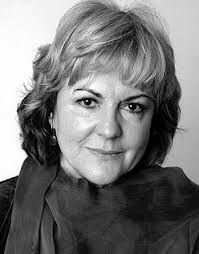 Gwen Taylor has been in a whole host of television shows starting in the early 1970s. Perhaps her biggest break and most famous series was Duty Free. She played Amy to Keith Barron's David in the very popular holiday sitcom set in Spain. She was in A Bit Of A Do with David Jason, Conjugal Rites with Michael Williams, Barbara with Sam Kelly and had a long run as Peggy Armstrong in Heartbeat.

"Which of these is soda bread?" she asked. I pointed to the correct item. She was very nice and I wished her a good run at the Opera House. I didn't suggest she break a leg. 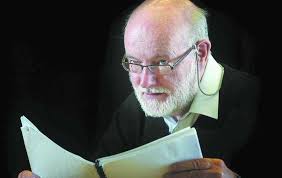 The next morning we met again. I don't want to give the impression that we spent a huge amount of time chatting. It was less than five minutes This time she was with her husband Graham Reid, the playwright most applauded for his splendid 'Billy' plays. I mentioned the plays and Graham reminisced a little about Jimmy Ellis and on another tack about Jimmy (J.G.) Devlin. I mentioned Jimmy E had written the foreword for my Stephen Boyd book and he said Boyd was often referred to as the 'Glengormley Cowboy'. I hadn't heard that nickname before. As I left them, Graham called out: "Keep writing. Just keep at it." 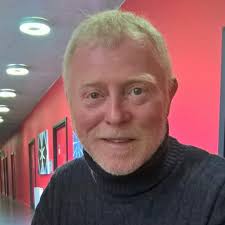 A little later the same morning, I had two hours of "me time" and had a wander. I introduced myself to the Poetry Jukebox, had a swift coffee in the Crescent Arts Centre, bought a book in No Alibis (Midwinter Break by Bernard MacLaverty, the owner digging into the display to find me a signed copy) and then headed for Waterstones where I recognised the poet Frank Ormsby. I said hello and he seemed relaxed enough to have a chat. He told me he had a new collection out for consideration with a publisher and the collection after that was already written. He reckoned in his writing life that there was on average nine years between published collections. 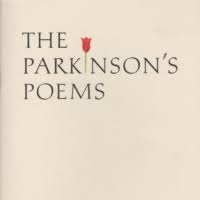 I mentioned that Damian Smyth from the Arts Council had sent me The Parkinson's Poems pamphlet and he was genuinely touched at that information. Referring to Parkinson's disease (he was diagnosed in 2011) he said that he reckoned, with a chuckle, the medication he was taking was instrumental in increasing the amount of poetry he was writing. He said he was writing far more than ever. I told him about some of my writing efforts and he said some very encouraging things.