POEM - BAD DAY AT THE OFFICE 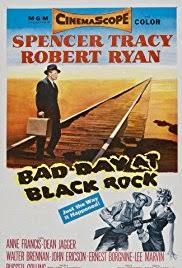 I’ve had bad days but not as bad as John J. Macreedy’s in Black Rock,
a day for him that began as he stepped off a train and into a world of secrets and lies,
isolated place of menace led by Reno Smith and his heavies, Hector David and Coley Trimble.
Spencer Tracy, Robert Ryan, Lee Marvin and Ernest Borgnine got on with their day
and I went to work in a bleak and miserable period of bad day after bad day after bad day.

We were a ‘respect for the individual’ company, modern American guru claptrap,
mouthed by old-school bosses who really couldn’t give a toss about changing.
Why change for the sake of change? After all, the old bark and bite ways worked.
“Just bloody well do your job, or else!”

Big bully boss-boys and, sometimes, girls dressed themselves in the morning
with a sneer, a grimace, ready to belittle, begrudge, be a bastard or bitch
because that was their fun, that was ego in top gear.
“JFDI!” “Just fuckin’ do it! Do you hear me? Do you hear?"

A mantra behind the wafer-thin curtain of culture, a workplace on paper
that looked like Disney cartoons, wholesome, encouraging, celebratory and proud.
Away from the bullshit, smeared on wall posters, on pocket-size leaflets, on badges
and message pads, stone-faced business tyrants - Renos, Hectors, Coleys
- underestimated us Macreedys. “JFDI!” they’d bawl, “JFDI!” LOUD.

Until one of our number, hit back, just like John J. -