JP Devlin, a Dungannon man, posted a tweet last week asking for personal stories to feature on BBC Radio 4's Saturday Live. My personal story regarding my father's life has been documented on this blog, in the Belfast Telegraph, on BBC Radio Ulster's John Toal Show and the same station's Arts Show with Michael Bradley. In addition, I have written the first draft of a memoir about my father and the fallout from his vanishing act and the material is being perused by two independent editors and a publishing company. Hopefully, a book will emerge in due course.

I sent a summary of the story to JP and he phoned me the same day to say he was very interested in it. He recalled reading about it in what he called 'the Belly Telly' and said he would run it by the editor. In a later phone call, he said they would be very happy to include it in the 24 February 2018 show.

On the Saturday morning I arrived at Broadcasting House, Portland Place in Central London and entered what one of the SL team described as 'the mother ship'. There were plenty of security men roaming the lobby. At reception, I checked in. I was on the list. I was photographed and within moments there was my handsome visage on a visitor's pass. My bag was scanned a la airport and I sat and waited for someone to escort me to the SL office.

In the office area, I was encouraged to take advantage of a selection of pastries and fresh fruit and offered tea, coffee or water. I was the first guest to arrive. Next in was Peter Lovatt, aka Dr Dance, a dance psychologist. Instant rapport. Along came JP to welcome us and help himself to a bunch of grapes. He is a warm, chirpy personality, instantly likeable and has the gift at putting nervous people at ease. In a short while, Debbie McGee arrived and what a delightful person. Again, instant rapport and easy conversation.

About 8.55am, we were all escorted to the Saturday Live studio to meet the main presenters Aasmah Mir and the Reverend Richard Coles who welcomed us warmly and played their part at making us feel at ease and comfortable. We all took our seats and, tick-tick-tick, at 9.00 the show began. It is a 90-minute magazine show, very informative and great fun. We all joined in and did our bit guided along by Aasmah and Richard, consummate professionals, brilliant broadcasters and hosts. In the taped pieces and news bulletin, when the microphones are off, the chat and the banter continued.

Listening at home or in the car to such a radio show is great but actually being in the studio is a revelation, seeing all the action, the comings and goings, the silent signals to control timings and so on.

By accounts, my own pieces were well-received by the studio team and by several texters/tweeters.

It was a great experience and for a while, you can listen to the show on BBC iPlayer via this link:

Dr Dance, Peter Lovatt's website is here and he is on tour soon: http://www.peterlovatt.com

Thanks to JP Devlin, Aasmah Mir, the Reverend Richard Coles and the Saturday Live team for looking after us so well and creating a great atmosphere in the studio.

And now, a few photos: 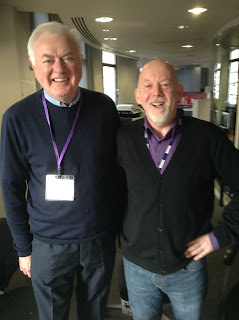 Me and the wondrous JP Devlin 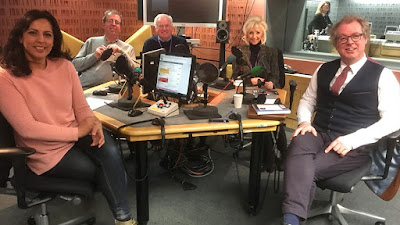 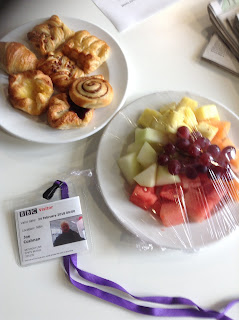