This post’s special guest is Ursula Burns who describes herself as the most dangerous harpist in the world. This songwriter, harpist and comedian has been performing all her life and enjoys breaking the stereotypical image of the harp. She says: The most important thing I have coming up is a live soundtrack album which will be released with the show, The Assistant's Revenge. It is limited edition and will be sold at the show." 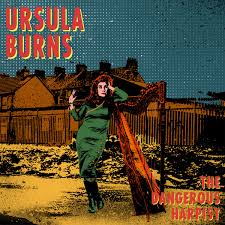 I blogged about Ursula and here is the link:

Here are other link's to Ursula's music:
https://whatsonni.com/event/39705-the-assistants-revenge/the-mac

1. What is your favourite word? Petrichoir

2. What is your least favourite word? Geoengineering
3. What turns you on creatively, spiritually or emotionally? Writing a song would tick all the boxes
4. What turns you off? Dealing with self-service machines

5. What is your favourite song? Today, Harvest Moon by Neil Young

6. What is your favourite film? Today, The Brand New Testament

7. What is your favourite curse word? Jesus, Mary and Joseph and the wee donkey
8. What sound or noise do you love? The sound of snow

9. What sound or noise do you hate? Depending on mood, the rain

10. What profession other than your own would you like to attempt? Let’s play pretend. Oh, the CEO of a company with business suits and brief cases and power shoulder pads – just for a day, mind!

11. What profession would you not like to do? Accountant/lawyer
12. If heaven exists, what would you like to hear God say when you arrive at the Pearly Gates? “You’re here. Harpo wants to say hello.”

Ursula Burns, thank you for your dozen answers to a dozen questions