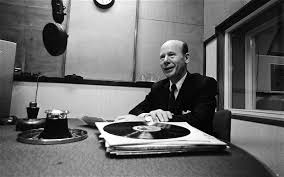 There is something rather comforting about the opening theme music for Desert Island Discs, the BBC radio programme that began 75 years ago on 29 January 1942. Roy Plomley who devised the show and presented it from the beginning to 1985 had the idea for natural sounds to introduce each edition; waves ebbing, flowing and crashing and sea birds calling and crying, allowing the listener’s imagination to get straight into the spirit of it all. Plomley preferred not to have musical accompaniment but he was overruled and the sea, the birds and the gentle air of By The Sleepy Lagoon has become one of the most familiar sounds on radio. The music lingers and the simple format has hardly changed over the years; a guest chooses eight records, a book and a luxury and chats about his or her life. In the beginning the rules about luxury items were very strict. For example, anything that would enable the castaway to escape from the island, like a boat or an aeroplane, was forbidden. As the programme has evolved, the rules have slackened more than once, reminding listeners that it’s really just a bit of fun. There have been many Irish-born guests over the years, but more of them later.

Roy Plomley came to broadcasting via estate agency, advertising and publishing. He had ambitions to be an actor and he appeared in bit parts in a few films. He was also a playwright. He gained radio experience as an announcer and producer but it seemed he was always thinking up new ideas to pitch to anyone who would give him a fair hearing, particularly at the BBC. He sent his idea to a producer for a show based on a castaway shipwrecked on a desert island with only ten of his or her favourite records to comfort them. After a bit of discussion about the format and the types of guests (mainly ‘serious’ unknowns from “the Establishment”), the idea was given the green light, but the record choices were reduced to eight to fit neatly into 30-minute programmes. Plomley did not envisage himself as presenter. He had thoughts of producing it and getting involved in booking guests and writing scripts. But presenter he became and the rest is broadcasting history.

The first programme in 1942 featured musician and comedian Vic Oliver, a big name in those days. He opened his record selection with Chopin and proceeded with more classical music and theatre songs. The 1940s shows were not scheduled at a specific time on a specific day. They were shuffled around and even the numbers of episodes per series were not set in stone. The format concentrated on music choices and the guests’ reasons for them. The now familiar additions of a book and a luxury item were included from the 1950s onwards. Notable guest castaways in the first year included bandleader Jack Hylton, comedian Arthur Askey, composer Ivor Novello and film star Leslie Howard. The programmes attracted mixed reactions from “most interesting” to “very poor”. But in 1946 the broadcasts came to an abrupt halt. After sixty-seven editions, there appeared to be little appetite at the BBC to produce any more. The idea had had its day, or so it seemed.

Five years passed and, after the show’s idea was unearthed in BBC management discussions, the decision was made to resurrect Desert Island Discs but this time the guest list was to be expanded to include more popular names and have fewer unfamiliar figures from the church, the military, highbrow literature and, generally, the elite. The net was cast wider for more actors, entertainers, sporting names and popular writers such as Peter Ustinov, Joyce Grenfell, George Formby, Stirling Moss, Gracie Fields and Monica Dickens. The first recorded luxury, in 1951, was crossword puzzles requested by Margaret Lockwood. The first recorded book choice was by actor Henry Kendall who chose Who’s Who In The Theatre.

Desert Island Discs has had four presenters in its history. Roy Plomley anchored the show until 1985, the year he died aged 71. After his rather plummy and posh speaking style, the choice of his successor, Michael Parkinson, brought a gruffer Yorkshire ingredient for the next three years. He was replaced by the smoother and more polished Sue Lawley who presented for the next 18 years, handing over the reins, in 2006, to the warm Scottish tones of Kirsty Young. In the early years, the show used fully scripted questions and answers but over time it evolved into a series of more relaxed natural conversations.

Most of the conversations have been genial, good-natured, informative and entertaining but occasionally there were examples of more serious and controversial subjects discussed. In 1989, Lady Diana Mosley described Adolf Hitler as fascinating and cast doubt on the number of Jews murdered by the Nazis. Gordon Brown, single in 1996, was asked by Sue Lawley about his sexuality, specifically rumours that he was gay.  He declined to answer directly. (In 2000, he married his wife Sarah). Film director Otto Preminger took exception to Roy Plomley’s suggestion that he had lead a gypsy existence. In 2009, Morrissey expressed supportive views on suicide declaring “self-destruction is honourable. It’s an act of great control and I understand people who do it”. Some listeners were horrified when Norman Mailer was granted his wish for the very best marijuana as his luxury item. Stephen Fry chose a suicide pill as his luxury.

It is remarkable in today’s rapidly changing world that some things hold fast to their origins. It would be easy to jazz up Desert Island Discs in an attempt to redesign it and force it to get down with the kids. It would be unsurprising if some future radio executive chose an inappropriate presenter for the programme. The wrong voice and any introduction of wackiness would kill the idea stone dead. It is a danger that could happen, heaven help us.


75 years on from the first programme and well over 3,000 editions in the bag, we should thank and celebrate Roy Plomley for inventing the format and for successive BBC regimes for guarding and protecting it, staying true to the original, simple premise.  It is radio at its finest, and like the shipping forecast that stirred many imaginations in the past, the notion of a desert island, a haven of peace and quiet in this chaotic world is not a bad thought, Cue the waves, the birds and the strains of By The Sleepy Lagoon.
- January 27, 2017