I was checking some old work diaries and remembered that around this time, 16 years ago in 2001, I spent a week in Festus, Missouri as part of an Asda/WalMart twin stores idea. It was not long after the US retail behemoth acquired Asda, a deal that shook an apprehensive and nervous UK retail industry, although any aftershock was fairly mild compared to gloomy predictions.

The twinning idea was sold to Asda managers as a chance for our American cousins to show us how to run stores, cheeky buggers. But, it was a chance to take a trip and see something and somewhere different to the usual tourist destinations.

The Walmart store is on a border between the towns of Festus and Crystal City (which would you use as your address?) on South Truman Boulevard. It is a 200,000 square foot building selling most things that you can think of, including, when I visited, guns and ammo.

The store manager, Steve Eddington, met me at the airport and over a snack in a diner, we chatted and loosely sketched out the week ahead. There was no real agenda. I had to spend time with Steve and with his other managers. I was introduced to the store team and welcomed warmly.

The daily routine would start with Steve picking me up at my hotel around 8 o'clock. On arrival at the store, he would grab his radio (such a big shed, all managers had radios) and we would spend the next hour walking around chatting to people and checking things. One morning, Steve suddenly stopped walking and appeared to have his eyes fixed on a display or something. He barked into the radio: "Chet, find me." Now, in this 200,000 square foot store, I thought Chet, one of the assistant managers., would take ages to find us, particularly as Steve had not given him a clue as to our location. But, in less than a minute, he appeared. Steve looked at him and pointed at a display. "Fix that." Chet nodded and made a noise and Steve and I walked on. Then and now, I have no idea what the problem was. Whatever else it was, this was an example of abrupt management.

After our morning wander, Steve and I would go to his office and read the mail over a cup of coffee. Come 12 o'clock, he indicated that we should grab some lunch. On one memorable day, he drove me to a place called The Catfish Kettle where we had what seemed like an endless supply of deep-fried fish, potato wedges, coleslaw and never empty iced tea glasses. What a lunch. We were stuffed. 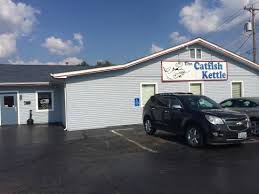 We drove back into the store car park at 4 o'clock - lunch hour! - and Steve's phone rang. From the way he was talking, I reckoned it was his wife. "We'll be there, honey. See you soon." Steve looked at me, stuffed full of fish and fries and said: "Man, I hope you're a good actor. We're expected at my place at 5 for dinner." I gulped.

When we got to Steve's house, I met his lovely wife (the name escapes me) and she ushered us straight to the dinner table which I swear was groaning under a feast of food - chicken, potatoes, corn,  bread rolls, macaroni cheese, salad and other goodies. Steve and I exchanged glances. I must have looked terrified. He shrugged his shoulders and said: "Dig in, buddy." And so we did, trying to appear ravenous and force-feeding ourselves to ensure we made a good dent in the food. I reckon the Eddingtons must have lived on leftovers for the rest of the week. I appreciated their friendliness and hospitality, but dinner at 5 after a hefty lunch 12 to 4 was not the greatest piece of planning.

All in all, I enjoyed the week. I didn't learn much about retail management but I'll not forget my week in Festus.