RESOLUTIONS ARE ALL VERY WELL BUT THERE ARE SOME THINGS THAT SHOULD JUST STOP!

Last year, I published book called Beware of the Bull into which I poured a lot of personal grievances, hopefully in a fun but semi-serious and sometimes very serious way.

Here's a few examples of what gets my goat, things that should just stop happening. 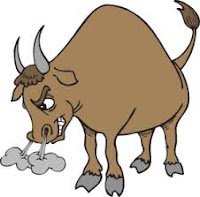 Stop the doom merchants from warning that the planet is running out of drinking water. There are aisles of the stuff in shops, bottles of still water, sparkling water, flavoured still water, flavoured sparkling water, all from hundreds and hundreds of secret springs in hills and valleys all over the place. Next time a doom merchant speaketh thus, drag him or her by the hair to your local superstore and hit them over the head with a six-pack.

Stop producing more and more variations of yoghurt. Surely fifty feet of it in an average supermarket is enough gloop.

Stop pretending that toothpaste alone can whiten teeth. Toothpaste with some whitening additive cannot whiten teeth unless the said teeth were white in the first place and then who would know. Whitening toothpaste keeps yellow teeth yellow and brown teeth brown. If you really want whiter teeth but don’t want to spend a fortune on it, then gargle with bleach every day for a week. I guarantee your teeth will gleam but the downside is you’ll be dead.
(Note to cretins: This is a joke. It is not advice, FFS.)

Stop making it sound as if all those fantasy films riddled with special hoohaa effects, wizardry, humungous battle scenes and heroic camera angles are in any way moral and spiritual guides to life. If you want profound thinking on humanity, look up old Peanuts cartoons. There were no swords, sandals and seriously spoken shite in that world. To quote Snoopy: “Zzzzzzzzzzz”.

Stop hotel owners from displaying “Best Hotel” and “Most Hygienic Hotel” certificates on walls if the certificates are more than a year old. Same with restaurants - Best Food Award 2001. In 2017, if you see a “Cleanest Hotel Of The Year” award dated 2005, with nothing more up-to-date, something’s up. Run before the rats catch you or you hear a cockroach cough.

Stop that loud beeping noise at hole-in-the-wall bank machines. What possible reason could there be for it than to alert muggers and bandidos that you are drawing out cash.  Furthermore, it is not too far a stretch to consider that the banks might just be in cahoots with the robbers (and the beep noise companies) to make a tidy bit on the side. But, silly me, banks would never do anything illegal, would they?

Stop turning everything into a conspiracy theory. And calling the theories names that end in “gate” after Watergate. After a while it all sounds ridiculous. Endless web-weaving will not bring back JFK or Elvis but twisting their stories is a lucrative industry and, unlike those two men, it is an industry that is unlikely to die.
We’ve had enough of Conspiracygate, so stop taking the Pissgate.

Stop installing those dragons-with-asthma handdriers in public toilets and speed up the installation of turbo-charged mega-blasters.
The breathy, sighing machines are as useful as a chocolate fireguard but the blasters not only dry hands quickly, they also create more noise than a space shuttle and blank out the guy in the stall farting or worse, having a loud chat on his mobile phone while taking a dump.

Stop the growing habit of some city and town plodders from trying to carry a mobile phone, a bottle of water, a can of energy drink and a sausage roll at the same time.  If we can’t stop them, evolution history suggests that humans of the future will develop four hands to carry round all our ‘essential’ crap.

Stop saying “it’s in my DNA” to emphasise something about yourself. Or maybe it’s in your DNA to be an arse.

Stop singers and bands from going onto TV charity programmes to promote their new records. If they feel compelled to make an appearance, it would be refreshing to hear them say: “We’re not here to promote anything. This is not about us. Here’s £100,000. Good night.” Like that will ever happen.

Stop the powder-keg practice of everyone waiting in the same room at the doctor’s surgery. Have separate rooms for the coughers, the sneezers, the wheezers, the sweaty, the fidgety, the sniffers, the scratchers and, well, you get my drift. And while I’m at it, change the pile of magazines every hour for fresh ones.