55 years ago, in 1961, The Dick Van Dyke Show was launched on US television.  Dick played comedy writer Rob Petrie and Mary Tyler Moore played his wife Laura.  It was a huge success, running to 156 episodes in its five-year life. It was great family TV back in the days when we only had a couple of channels and we were still in awe of American shows featuring cops, cowboys and comedians

I thought I'd just blog a little bit about Dick Van Dyke.  On screen, he has had various phases in his career from the aforementioned TV show to other small screen series and, of course, films.

When he started making The Dick Van Dyke Show in 1961, he was thirty-six.  When he started on Diagnosis Murder, he was sixty-eight.  In 2006, again with son Barry, he made several TV films under the banner Murder 101.  He was in his eighties.  Around that time, he starred in Night at the Museum as Cecil alongside Mickey Rooney, Ben Stiller and an all-star cast.  He was in a Museum sequel too.  I only mention the ages because I am trying to emphasise that Dick Van Dyke is a trouper, with show business in his blood, multi-talented, with the ability to warm the screen any time he appears.

Recently he was a hit all over again when a YouTube clip of him singing Chitty Chitty Bang Bang in a diner went viral. 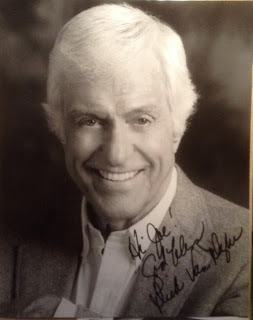