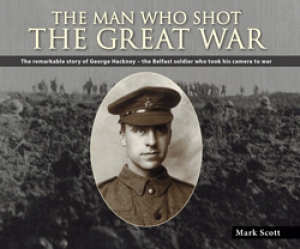 THE MAN WHO SHOT THE GREAT WAR
THE REMARKABLE STORY OF GEORGE HACKNEY – THE BELFAST SOLDIER WHO TOOK HIS CAMERA TO WAR
By Mark Scott
Foreword by Col. Tim Collins

Lance Corporal George Hackney of the 36th Ulster Division was an ordinary Belfast soldier who, contrary to military law at the time, took his camera away to war in 1915. The images he took have become an exceptional and rare collection that documents The Great War first hand. George’s images of soldiers training, travelling to France, and relaxing with friends and comrades contrast with his later images from the first day of the Battle of the Somme, life in the trenches and poignant reminders, that for many soldiers, they would never return home. This story also reveals how one man’s wartime experiences fuelled an unlikely moral quest that was to change his life forever.

For those of us fortunate enough never to have been in a major conflict, we can try to imagine or pretend to imagine what life was like in the First World War for soldiers on battlefields, in trenches, on the march, under bombardment, witnessing death and destruction all around them and dealing with their own fears and demons. But the truth is, we haven’t a clue.

We rely on historians to relate the broad sequence of events but first-hand accounts by individuals who actually lived with the stench and terror of war bring home much more of the reality of what life – and death – was like. There are many such individual narratives by former soldiers in books and archives and they are all brave attempts to tell us, to warn us even, about the futility of war, the horrendous conditions and the terrible loss of life. There are many collections of photographs of war zones, of soldiers in a range of poses from high spirits to deep despair, from sharing a joke to mourning dead comrades, soldiers in informal moments to to those standing formally straight and proud.  Most war photographs, as far as I know, are taken by people employed as Press or freelance war photographers.  So, there are powerful words and powerful pictures, as there should continue to be.

The excellent book, The Man Who Shot The Great War, is a little different to the norm in that the photographs from locations and episodes of The Great War were taken not by a professional photographer but by a soldier permitted to carry a camera, something very unusual indeed. George Hackney was a working soldier in amongst the bombs, bullets, muck and madness but he was allowed and found moments to capture pictures of his fellow soldiers and their working and living conditions.  Some of the photographs show relaxed people doing their best to find comfort and others show gaunt, worried and frightened soldiers unsure about what just happened around them or what would happen to them in the next moment or round the next corner. It is a remarkable collection of images that would be easy to skim but for the thoroughly researched details that feed the story. We are not just looking at random photographs but, with Mark Scott’s deft hand, we are introduced to many of the soldiers featured in the shots. We get to know their names, their addresses back in Northern Ireland, some family history and whether they lived or died. We are drawn into personal stories that, I have to admit, sometimes brought a tear to my eye. I am not suggesting that George Hackney’s work cannot stand alone as a pictorial record but I am saying that the identification of individuals adds more power to what is already a powerful, striking set of images. The photographs and the words, enhanced by front line diary entries, underline so much about the desperation that wars bring.

George Hackney survived the war but carried the mental scars and bad memories for the rest of his life. After military service, he had little interest in photography as any kind of career. He returned to live and work quietly in Belfast, finding a religion that suited his quest for personal peace.

He died in 1977 at 89. His headstone is carved with the single word “Hackney”. “The simple headstone in a strangely comforting way is a more than appropriate monument to mark the final resting place of the man we know him to have been. The man at one with nature. The warrior. The quiet unassuming gentleman. The man of faith seeking a oneness of Mankind and World Peace. Ulster’s finest war photographer whose work remained locked away, unseen, along with his bitter memories.”

Mark Scott has done a brilliant job of telling this remarkable story and I urge a wide readership for The Man Who Shot The Great War.

p.s. If you get a chance to see the Doubleband Films documentary of this story (shown recently on BBC television) directed by Brian Henry Martin, I recommend it highly.