A RANDOM STORY ABOUT DEREK NIMMO 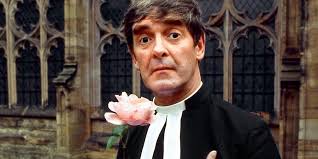 In the early 1980s, I worked in the head office of the late, lamented British Home Stores located on Marylebone Road in London. The administration office where I was an audit manager was situated on the ground floor. It was a busy office with comings and goings all day and we became quite blasé about who would be next to walk in with a query, a bulletin, an armful of papers to be copied or signed. But one day, one of our team members let out a gasp and quite naturally we all looked up. Lo and behold, standing in the doorway was none other than actor, radio’s Just a Minute panellist and TV advertisement voice-over regular (‘P – pick up a Penguin’) Derek Nimmo.

As I recall, he was dressed immaculately in a light grey suit, white shirt and what looked like a pink and green club tie. Someone clarified later that he was a member of the Garrick Club.

He came across as a little shy but spoke in a hesitant, breathy, quite plummy voice so familiar from his characters, Reverend Mervyn Noote in All Gas and Gaiters and Brother Dominic in Oh Brother! He said: ‘Hello. I wonder if you would mind awfully if I used your phone. My car has broken outside and I need to call for help.’

Of course, we invited him to use the telephone and when he had finished, he stood for a little while and chatted to us. He thanked us profusely and left the office to wait at the front doors. We all agreed that he was a very nice, friendly, charming gentleman, and so grateful for our assistance.

Of course, he played more than clergymen roles, but that is how the 1970s generation remembers him. I knew he had done a turn as Bingo Little in the 1967 World of Wooster and starred in various other sitcoms and feature films, even popping up as an English Lord in Neighbours.

It was very sad to read about his death at 68 in 1999. It is a strange thing but sometimes ‘lay people’ when they cross paths with celebrities feel a kind of emotional ownership. Some celebrities are cold fish, but Mr Nimmo was a joy to encounter for a few minutes and it was refreshing and memorable because of his genuine charm and gratitude.