Absolutely delighted to present a guest post by poet Gaynor Kane.  Her new collection - Venus in pink marble - is out in September.

Gaynor Kane lives in Belfast, Northern Ireland. She came to writing late in life, after finishing her Open University BA(Hons) degree with a creative writing module in 2015/6. Mainly a writer of poetry, she has had work published in journals and anthologies in the UK, Ireland and America. In 2018, Hedgehog Poetry Press launched their Stickleback series with her micro-collection ‘Circling the Sun’, which is about some of the early aviatrixes. Gaynor released her chapbook ‘Memory Forest’, also from Hedgehog Press, in December 2019. It is a thematically tight collection about burial rituals and last wishes. She is about to release her debut full collection, Venus in pink marble, after receiving an Arts Council NI grant in 2019, which allowed her writing time and mentoring. 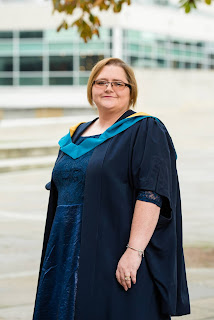 Last year local poet, Colin Dardis, interviewed me for the Honest Ulsterman and I went way over the wordcount, so one of the responses was heavily trimmed. I thought I would use the opportunity of having a guest spot on your blog, Joe, to fully address the question and elaborate on my thoughts on the poetry community. Thanks for being an opportunity giver Joe, it’s much appreciated!

Question:  As a Northern Ireland-based poet, do you feel it’s perhaps harder to gain platforms for your work and reach audiences, than it might be for a Dublin-based or English poet for example?

No, I actually feel incredibly lucky to have had numerous platforms for my work, and opportunities to reach audiences, in the short time I’ve been writing.

I’m based in Belfast and every month (under normal, pre-covid, circumstances) there are open mic nights, such as ‘Purely Poetry’ at the Crescent Arts Centre.  Colin Dardis and Geraldine O’Kane, under the guise of ‘Poetry NI’, organise the monthly open mics and also offer other performance and publication platforms. I was delighted to feature in Issue 25 of ‘FourXFour’ the quarterly online journal that Colin is editor of. I’ve also had one or two poems in ‘Panning for Poems, curated by Geraldine.

I’ve taken part in several festivals including the EastSide Arts Festival, Open House, Mountstewart Conversations and Aspects, often as part of Women Aloud NI. Women Aloud NI is an organisation which aims to raise the profile of female writers from, or living in, Northern Ireland. Annually, they celebrate International Women’s Day with a ‘Women X Borders’ event at the Irish Writers Centre. They are a great community and in the online group there is always someone to answer a question or point you to a competition or submission deadline. During lockdown they ran a weekend Facebook Live festival and published an anthology of writing, called ‘North Star’.

I’ve form strong friendships with many in the group. One such person Jo Zebedee, who owns the Secret Bookshelf in Carrickfergus, and I’ll be making a special trip soon to do a book signing and reading for the shop’s YouTube channel. Another, is Karen Mooney who has introduced a book launch for me, interviewed me for Northern Visions TV and has sent in several of my video poems for screening. I was pleased when Karen asked myself and another writer, Byddi Lee, to collaborate in curating a weekend of readings as part of the Mounstewart Conversations festival and we formed the KGB. But we aren’t always literary assassins 😉

Byddi Lee and Réamonn O’Ciaráin curate readings for a very popular event ‘Flash Fiction Armagh’. They have also published ‘The Bramley’ (volumes 1 and 2) which contains the written work of participants and they have a YouTube channel with videos of all the performances. I’ve had the pleasure of performing there several times and hope to do so later this month as part of Armagh Cider Festival.

When I started writing I enrolled for a regular class at the Crescent Arts Centre. It was facilitated by Moyra Donaldson and it was invaluable to me at that stage in my writing to have the support and encouragement from someone with a long established and significant track record. A couple of years ago Moyra gave me the opportunity to take part in a ‘Fired! Irish Women Poets’ event as part of Aspects Festival in Bangor.

Last December, Amy Wyatt and Paul Rafferty, the editors of the Bangor Literary Journal, afforded me the chance to be Guest Poetry Editor of the Winter issue. This was another great opportunity which allowed me to see the submission selection process from the other side. The standard of poems was incredible, it was such a difficult undertaking to narrow it down to a dozen poems from over 100 submissions. I do not envy them having that tasks regularly! The main thing I took away from that experience was that very good poems get rejected. So, if you’ve looked at a rejected poem and can’t see anyway to improve it by editing, keep submitting it until it finds the right home. In addition, they organise regular events and one of the annual highlights is the Bangor Poetry Competition, which I was lucky to win last year. The winning poem ‘Fire-lighting’ is in my full collection ‘Venus in Pink Marble’ published this month.

I have been fortunate to be awarded a bursary to attend the John Hewitt International Summer School. I’ve also received funding for professional development from the Arts Council of Northern Ireland. My writing group, Holywood Writers, has published my work in their anthology ‘Field of Stars’ and created reading opportunities. They also give me invaluable feedback on draft poems.

More recently I’ve had access to online platforms such as the ‘Over the Edge’ and Cheltenham Poetry Festival open mics. I’ve also hosted the notable Twitter phenomenon #TopTweetTuesday, the brainchild of Black Bough Poems and I regularly contribute a poem on Tuesdays. There is a great poetry community on Twitter. In the run up to the publication of ‘Venus in Pink Marble’ I have had a lot of offers of reviews and interview from poets I follow there. 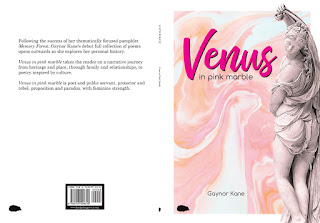 Many of those people are other Hedgehog Press poets. I joined the Hedgehog Poetry subscription club (affectionally named ‘The Cult of the Spiny Hog’) at its inception; I was member number four. Mark Davidson, the editor, has created a member’s area of the website for us and he provides monthly writing prompts which often result in the winners being published in anthologies. Along with that, the subscription also means that you receive a quarterly bundle of all the books published by the press and free entry to all the competitions. Mark has given me so many publication opportunities, in anthologies and standalone collections (namely ‘Circling the Sun’, 2018, and ‘Memory Forest’, 2019). He has also taken an interest in my personal and artistic development and we have had some preliminary discussions about the direction that might take after releasing my full collection.

I’m going to add a caveat here to say this list isn’t exhaustive and there are many publication, developmental and promotional platforms I’ve had access to, in real life, hardcopy and online that I haven’t mentioned here. But I’m always grateful.

There are some lists of links to poems, interviews and books on my website if any of the readers would like more information.

So, I’d summarise by saying the platforms for publication and promotion are definitely there and you don’t have to look too hard to find them. If you can’t find the particular outlet you are searching for, then create it yourself and invite others to join in. Embrace every opportunity and, if you can, try and give a little back because what goes around, comes around!