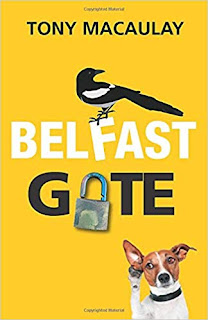 It's Belfast in 2019 and despite more than twenty years of peace, scores of so-called peace walls continue to separate Catholic and Protestant neighbourhoods. Jean Beattie's grief turns to anger when police refuse to open the peace gate at the end of her street to allow her best friend's funeral procession through to her church on the other side of the peace wall. The gate remains closed because local youths, led by Sam on one side and Seamie on the other, are recreational rioting. Comforted by her friends Roberta, Bridget and Patricia from the cross-community pensioners' club, Jean vows the gate will be opened.

It takes some skill to write a comedy novel against a backdrop of some terrible history, and Tony Macaulay demonstrates that skill here in abundance.  The blurb above sets the scene.  It is a story of four women, two Catholics, Patricia and Bridget, and two Protestants, Jean and Roberta, who decide to ‘do something’about the huge gap between cross-community efforts for lasting peace and re-establishing normal lives, and the existence of a ridiculous, divisive, so-called peace wall.  They plan a campaign – Get Our Gate Open– and call their gang the GOGO Girls.  Jean is the leader of the pack.
They know it is not an easy thing to do to challenge thugs, bullies and shadowy figures, but they find the grit and determination to at least try to find a way to improve their divided streets.  It is a journey of anger, frustration and exasperation, but also of strength and bravery.
The dialogue is written beautifully in pure Belfast-speak and many of the exchanges between the women, the self-appointed big shots and slabbering youths are hilarious. I was born and raised in Belfast and I can hear these voices clearly.  It has always been a ‘wait-a-wee-minute’, ‘catch-yourself-on’ kind of place.
Tony Macaulay keeps it real all the way through, using incidents and graffiti messages and other references to maintain a feeling of tension. Sometimes, it is, as advertised, a laugh-out-loud novel, although some of the jokes are groaners, but, hey, in comedy that’s allowed. There is much grass roots wisdom in the lines and between the lines too.
But, don’t be lulled into thinking that it’s laughs all the way.  There is a moment that made me gasp as the plot took an unexpected turn, and, as I mentioned right at the beginning, it takes skill and writer’s courage to pull a surprise without harming the spirit of the story.
Jean is the stand-out character but the individuals in the supporting cast are strong too.
This is a superb novel, and timely.  It is a reminder that ordinary people can make things happen while idle politicians fail to work positively for the people.
Belfast Gate – stickin’ out!