His screen acting career started in 1962.  In that year, he was nominated for a Best Supporting Actor Academy Award in his first major film, Billy Budd, and he won a Golden Globe for New Star of the Year, for the same film.

Handsome as hell, he was seen as one of the beautiful people of the 1960s.

Not long after the release of The Limey (1999), I wrote a fan letter to him and he sent this signed photograph, a still from that very film. 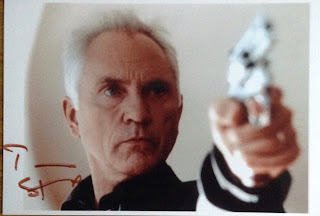 Signed photo from my autograph collection.