Laurence Olivier died at 82 on 11 July, 1989.  He is rightly acknowledged as one of the finest actors of all-time.

He won the following screen accolades, amongst others, 4 Academy Awards, 3 BAFTA Film Awards, 2 Golden Globe Awards, 5 Emmy Awards and 1 Tony Award. His CV covering all mediums is outstanding. Not only an actor, he was director, producer and contributing writer to many productions.

On stage and screen, he was versatile, tackling the classics and performing in a variety of roles encompassing drama and comedy.

I wrote to him a long time ago and he sent me this signed photo of his character in the film A Little Romance (1978), directed by George Roy Hill and featuring Diane Lane in her film debut. 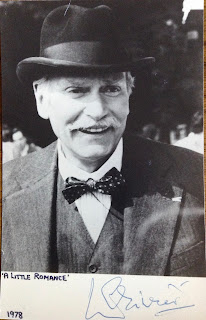 "Acting is a masochistic form of exhibitionism. It is not quite the occupation of an adult."