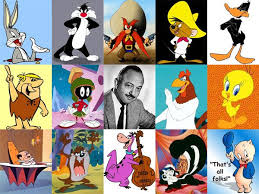 and many, many others in the golden age of TV cartoon shows.

He was born in San Francisco in 1908. He started out on a radio career in 1927, using his talent for voices in variety shows, including those of Jack Benny, Abbott and Costello and Burns and Allen. He built a reputation as a versatile voice actor and was snapped up by Warner Brothers (Looney Tunes) and later, Hanna-Barbera (The Flintstones and The Jetsons). His place in television and cinema history is secure. There was no one like him and today, I salute him for his talent and for the hours and hours of entertainment he provided with all those quirky, unforgettable voices.

He died on 10 July, 1989 and is buried in Hollywood Forever Cemetery. This is his gravestone.