Unafraid of becoming older, she once said: “You can’t put your finger in the sun and stop time”.

Born with a gift of a name for poetry – Maria Cristina Estela Marcela Jurado Garcia - a child
from Guadalajara grew to be described as fiery-eyed, luscious, smouldering, passionate, strong, and, according to one husband, a beautiful tiger.

She was more than westerns but that is her place in the loving memories of those of us who have watched her hundreds of times in High Noon (1952: she won a Golden Globe), Broken Lance (1954), Man from Del Rio (1956), The Badlanders (1958: she was nominated for an Oscar) and One-Eyed Jacks, and seeing her tearful and distraught as she watches Slim Pickens dying in Pat Garrett and Billy the Kid (1973).

Katy Jurado was married twice, the second time (1959 - 1963) to Ernest Borgnine.  She had a relationship with western writer Louis L'Amour.

On the streets of Hadleyville, Marshall Will Kane’s clock ticks relentlessly and Helen Ramirez will always be 28-years old, just like Katy Jurado. 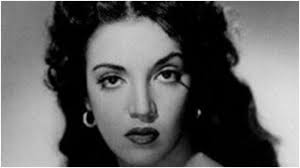