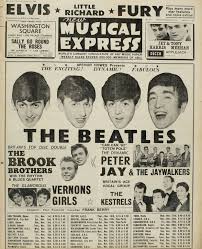 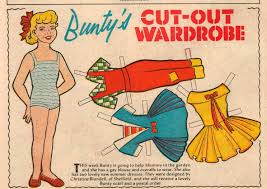 The demise of the New Musical Express, condensed over the years to NME, brought back memories of weekly anticipation. It was a music paper I devoured and I remember playing the deejay using the printed charts (hit parade) to run them down out loud in a breathless race to cram the top 30 into a minute, like Alan Freeman used to do at the end of Pick of the Pops. When I first started reading the NME it covered a wide variety of music but then it steered itself towards punk and I kinda fell out with it, switching my allegiance to the Melody Maker. The NME was essential reading at one time but, alas, it's time is up.

I was also reminded of the other publications we would get every week. This was in the early 1960s. The girls in our house favoured the Bunty and the boys the Valiant or the Hotspur. We all found common ground with the Beano, the Dandy and the Beezer. I must confess that I had a soft spot for the Bunty. On the outside back cover there was an illustration of a girl (Bunty?) and some skirts and tops to cut out. I enjoyed the fashion and flair of dressing the girl in a selection of outfits. If I used my mother's pinking shears, they gave a distinctive look to the outfits. My sisters and brothers looked on with a variety of facial expressions, obviously in awe of my creativity and imagination. There were no such cut-out features of Desperate Dan or Colonel Blink, sadly.

Our paper bill must have been steep but those weekly publications were valuable in terms of entertainment and, sometimes, education.