This is the trailer for a short film called Two Angry Men, an account of the fierce struggle James Ellis and Sam Thompson encountered, endured and eventually won to stage Thompson's controversial play 'Over The Bridge' about sectarianism in Belfast's shipyards in the late 1950s/early 1960s.

The film was directed by Toto Ellis, James Ellis's son and produced by my friend Davy Kilpatrick from Clean Slate TV, Belfast.

The trailer sets the scene and tone beautifully and black and white photography helps the mood enormously.

I was lucky enough to meet Jimmy Ellis in 2010 when we both contributed to a BBC NI TV documentary of film star Stephen Boyd, another Davy Kilpatrick/Clean Slate TV production.  Jimmy was very gracious and generous to me, encouraging me to complete a biography of Boyd and offering to write the foreword, which he did, insisting he needed to read it to me over the phone to see if I approved! Later, I met his lovely wife Robina and son Toto. It was devastating when he passed away in 2014 at 82.

Jimmy's own account of those stressful days, 'Troubles Over The Bridge', is an important story of a torrid, authoritarian time in Northern Ireland's theatre history, told by the man who was at the centre of the storm. It is a brilliant book and well worth checking out. It should be available in Belfast (and beyond) book stores and online. It was published by Lagan Press. 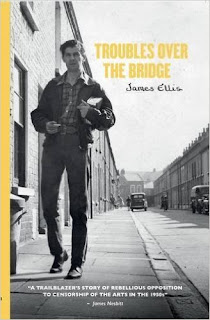 Toto Ellis's film is a natural companion to his father's book.

The film is being premiered in Belfast and London in December and it has been entered into the Cork Film Festival.  It deserves to do well. It could well appear on BBC television, as the BBC has a stake in it.

Please forward this post to promote the film, and also to remember the wonderful James Ellis.

Here's the blurb from the book:

Belfast, 1959: the young Group Theatre director James Ellis is approached by playwright Sam Thompson, who announces "I got a play you wouldn't touch with a bargepole!" The play was Over the Bridge, Thompson's powerful portrayal of a sectarian dispute in the city's shipyards. After its effective banning by the Group Theatre's board of directors following representations from the Unionist establishment, Ellis resigned from his position as a matter of principle in order to direct the production of the play. In this book, James Ellis provides a first-hand account of the strong and well-orchestrated attempts to censor Over the Bridge, and how these were overcome, allowing for the eventual staging of a dramatic work that would become a defining landmark in the cultural history of Northern Ireland. James Ellis (1931-2014) was a Northern Irish writer, actor and stage director with a career stretching over sixty years. Best known for his work in television and film -mediums in which he maintained a high profile in for nearly forty years - he also starred in West End stage productions. As a stage actor he did seasons at the Barbican with the Royal Shakespeare Company, with the National Theatre and Sir Peter Hall's company at the Old Vic. Ellis is best remembered for his role as Bert Lynch in the long-running BBC TV detective/police series Z-Cars (1962-78).