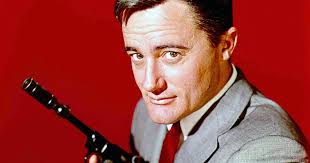 It was almost certainly Christmas 1965. Santa brought me one of the most thrilling presents of my life - an attache case.  But, before you scoff at such a present for an 11-year-old, this was no ordinary attache case. This was a Man From U.N.C.L.E. attache case. As far as I can recall, it contained a pistol that could, with an attachment, become a rifle, another small gun with optional silencer, some toy dollars, walkie-talkies, a pen "transmitter" and a yellow, triangular badge with number 11 on it.
I can't describe the excitement of that morning. You see, I was besotted with The Man From U.N.C.L.E. television spy/secret agent show starring Robert Vaughn as Napoleon Solo (Agent 11) and David McCallum as Ilya Kuryakin (Agent 2).

As a kid, westerns were my thing (still are) but I also loved shows like The Saint, Danger Man, The Avengers and, especially the Man From U.N.C.L.E.  It stands for United Network Command for Law Enforcement. For days, weeks and months after that Christmas morning, I was Napoleon Solo (Agent 11) fighting the bad guys who were called T.H.R.U.S.H. (I know, I know!) which stands for Technological Hierarchy for the Removal of Undesirables and the Subjugation of Humanity. Gulp. It was basic good guy versus bad guy stuff and had a killer theme tune. It transformed a young Belfast kid into an international man of mystery, sorta.

Robert Vaughn, who has passed away at 83, made Solo suave, sophisticated, brave, sexy (although I didn't quite get that in 1965), cool and funny. His partnership with David McCallum was TV gold in my world.

He cut his acting teeth in the theatre, guest starred in television shows and found decent roles in films. In 1959, he was nominated for an Academy Award for his role in The Young Philadelphians, a drama starring Paul Newman. A year later he was cast as edgy gun-for-hire Lee in The Magnificent Seven, a western that took a while to become one of the much-loved movies of all-time. The legendary cast including Yul Brynner, Steve McQueen, Charles Bronson and James Coburn, and the brilliant Elmer Bernstein score combined to make this an enduring classic. I must have seen it a hundred times and it never fails to entertain, even though I know the script off by heart.  After The Magnificent Seven, it was back to various roles mainly on the small screen in shows like Wagon Train, Laramie, The Dick Van Dyke Show and The Dick Powell Theatre.

In 1964, he was cast with David McCallum in The Man From U.N.C.L.E., one of a number of TV shows and films riding on the back of James Bond's popularity and a global audience's appetite for Cold War-related screen fodder. It was a hit and both stars entered a world of fan frenzy not a million miles away from Beatlemania levels. I filled scrapbooks with photos and clippings. I had posters on the walls. And I had my attache case, of course.  I always leaned towards Robert Vaughn. I liked the cut of his gib and enjoyed the moments when he would hide behind a pot plant and talk into his pen. "Open Channel D". I did that too. His was hi-tech. Mine was a Bic.

After the heady days as solo, Vaughn worked away adding notable roles to his CV - Walter Chambers in Bullitt, again with Steve McQueen, Major Kreuger in The Bridge at Remagen, Harry Rule in The Protectors, Frank Flaherty in Washington: Behind Closed Doors, Ross Webster in Superman III, General Stockwell in The A Team and Albert Stroller in Hustle. He even managed a few episodes of Coronation Street.

In addition to his acting, Robert Vaughn was a political activist, a Democrat who took a very public stand against the Vietnam War. He wrote a brilliant book on the McCarthy era, Only Victims: A Study of Show Business Blacklisting and an entertaining autobiography, A Fortunate Life.

He is the last of the 1960 Magnificent Seven cast to ride on. The movie is shown regularly, as it should be. He will not be forgotten. He was an important part of my childhood, stirring my imagination, transporting me into a world of intrigue and derring-do.

Fast forward from 1965 to a couple of years ago.  I collect autographs and, knowing Vaughn was in London working on Hustle, I wrote to him to tell him all that fan stuff about admiration and loving his work, and I asked for an autograph.  Some weeks later, I got a letter back from him which was a little disappointing at the time but is treasured now.  He had folded my letter and scribbled a few words and his signature on the back.  I was expecting a nice photo but, I suspect by then, he was well passed the signing pics phase of his life. Here's what I got: "To Joe, many thanks for your kind words. Robert Vaughn." 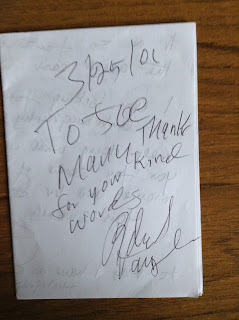 But, of course, I mustn't grumble. At least he replied and now, at this sad time, the scribbled note means more than it ever did.  He was a hero to me and it has always warmed the heart to see him on screen, and it will still be so. He is forever Napoleon Solo in my world. "Open Channel D. RIP, Mr Vaughn, wherever you are."