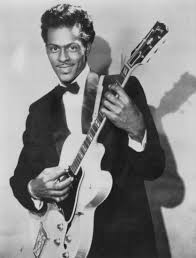 His is a true giant of rock and roll, a singer, songwriter, guitarist, all-round showman and a huge influence of many performers.

These quotations are attributed to Chuck Berry himself:

"I grew up thinking art was pictures until I got into music and found I was an artist and didn't paint."

"Rock's so good to me. Rock is my child and my grandfather."

"Rock and roll accepted me and paid me, even though I loved the big bands. I went that way because I wanted a home of my own. I had a family. I had to raise them. Let's don't leave out the economics. No way."

"My music is simple stuff."

"Of the five most important things in life, health is first, education or knowledge is second and wealth is third.  I forget the other two."


Here are 10 of my favourite Chuck Berry songs:

Maybellene
Roll Over Beethoven
Rock and Roll Music
Johnny B. Goode
Memphis, Tennessee
Nadine (Is It You?)
You Never Can Tell (C'est La Vie)
Promised Land
Too Much Monkey Business
No Particular Place To Go
and
My Ding-a-Ling (I'm kidding!!!)

The best cover of a Chuck Berry song, in my view, is Rock and Roll Music by The Beatles, featuring John Lennon's greatest raw, rock and roll vocals.

I like Bob Seger's cover of You Never Can Tell, Dion's version of Nadine and, of course, Johnnie Allan's version of Promised Land is a classic in its own right.

But it's hard, nay impossible, not to enjoy the originals, especially the classic intro to Johnny B. Goode - an unmistakeable signature tune.