A new big screen version of Ben-Hur has been released.  It is entirely right for great stories to be filmed in various ways, just as Shakespeare's work is repeated over and over again by different casts and production teams. The story should remain intact but the acting, directing, dialogue and so on should be experimented with and freshened up for new generations.  I haven't seen the new version and I'm not sure I will but from trailers, it is technologically and digitally cleaner and crisper as a film but whether or not it can match the status of William Wyler's 1959 version remains to be seen.

It is no surprise to those who know me that a mention of Ben-Hur turns my thoughts immediately to Stephen Boyd.  I attempted a biography of Boyd a few years ago and it ticks along nicely, attracting some kindly remarks and the odd snub here and there. But that's showbiz and by the by. The film made him a star.  When he was making it during 1958, he was 27-years-old.  On screen, he was (is) mature, confident and more than a match for the older and more experienced Charlton Heston. 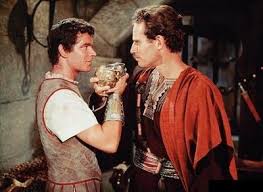 Let me take you through a list of the awards bestowed on this MGM classic to illustrate just how monumental it was and is in the history of motion pictures.  It won the following Academy Awards: William Wyler for best director; Charlton Heston for best actor; Hugh Griffith for best supporting actor; William A. Horning, Edward C. Carfagno and Hugh Hunt for best art direction; Robert Surtees for best cinematography; Elizabeth Haffenden for best costume design; A. Arnold Gillespie, Robert MacDonald and Milo B. Lory for best special effects; Ralph E. Winters and John D. Dunning for best film editing; Miklos Rozsa for best music; Sam Zimbalist for best picture; Franklin Milton for best sound. Karl Tunberg was nominated for best screenplay but did not win.  It won a BAFTA for William Wyler’s direction.  It won Golden Globes for best picture, best director and, for Boyd, best supporting actor.  In addition, it won a Golden Globe for Andrew Marton’s direction of the chariot race.  It won a Grammy for Rozsa’s score.  It won several more awards in international ceremonies.  It was a huge success and deservedly so.

It will be a tough call for any version of this story to beat that tally.

The flaw in the list is that Stephen Boyd failed to be nominated for an Oscar. His friend and producer Euan Lloyd (The Wild Geese, Shalako, etc) said: “Anyone who questions the strength of Stephen Boyd, the actor, (and there were some) should take another look at Ben-Hur.  I believe William Wyler was more shocked than most of us that the Academy overlooked him in the Oscar race.”

Hey-ho Hollywood.  When all is said and done, Stephen Boyd hit the heights with that movie and carved a decent career through the 1960s and early 1970s, some great films and some duds but you can't undo his presence in one of the most successful productions the world has ever seen.