BOOK REVIEW - WATCHING THE WHEELS: MY AUTOBIOGRAPHY BY DAMON HILL 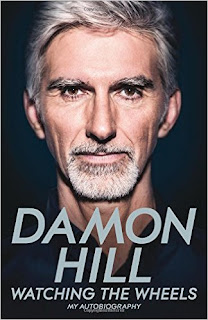 “I could not have asked for more than to have raced against the most successful racing driver of them all (Michael Schumacher) – and won!  And to think of all the people who had told me that I was either too old, too slow, or too late; or that I should get a proper job, or that I shouldn’t waste my education on motor sport. When I think about that, I thank them for pressing my button: the button that makes me think, “NO WAY!”. That button is still there. I can’t help it. It’s deep, deep, deep inside me, but perhaps not so loud any more.”

It was my son Steven who, in the early 1990s, latched onto Formula One but he tired of it quickly after watching a couple of “boring” races. My other son David took up the baton and has been a passionate and knowledgeable fan of the sport for over twenty years. We watched almost all the races involving Damon Hill. We were big fans. Even on holiday in some remote spots, we would spend (waste?) time trying to find a TV in a bar or wherever to enjoy the races. On a connected note, also abroad, we would spend (waste?) considerable time trying to find Autosport magazine, always to no avail. David was, as they say, avid……. and sometimes livid when we couldn’t find what we were looking for.

This was the era of Damon Hill and, for a time his arch-rival, Michael Schumacher. There were more exciting races than not and the rivalry of these drivers and other feisty fighters thrilled and entertained us on most weekends. Add to that the priceless enthusiasm and exuberance of commentator Murray Walker and it was a classic time for fans.  We cheered Hill on to some brilliant victories and podium places. Our shoulders fell when he crashed or his car conked out. We booed Schumacher but, really, we were in awe of his amazing talent too.

This enthralling autobiography of Damon Hill could have been a dull account of race after race, about the shenanigans of Formula One’s organisation and administration, and a rather stiff account of a short but superb career as a racing driver.  But, far from it. This is a human story of a man born into some privilege (in 1960) and into the spotlight that surrounded his legendary father, Graham Hill, and how he carved his own niche as a champion in his own right. The biggest personal moment in his life – at the age of fifteen – was trying to come to terms with the shock news of his father’s death in an aeroplane accident and the ensuing grief. Hill spends considerable time analysing his father’s global fame versus the man he called Dad.  He is also very sensitive to the sacrifices his mother made to accommodate and support her husband’s career in a relationship that was far from plain sailing.

The opening pages of the book are rather stunning because Hill talks about his depression after quitting racing. It is quite an open self-appraisal of how he and his family were affected by the challenges of moving away from an adrenalin-filled sport to a slower-paced normal life.  It is the beginning of quite a bit of self-diagnosis that is a theme throughout the book, but not a theme that drags the story down.  By revealing his thoughts, Hill injects vulnerability, warmth, realism and, above all, humanity.

Young Damon was not a fan of school or the education system generally.  He got his inspiration from music, including punk rock, and his kicks from motorbikes.  He would race when opportunities arose and he honed his skills as a dispatch rider in London’s traffic, in the early 1980s.  He had little interest in car racing.  But he was interested in Susan George, not the actress, but Georgie, the woman he would eventually marry and with whom he would raise four children.

As the years moved on, he devoted much of his time to motorcycle racing before transferring to cars, in spite of his resistance to following in his father’s footsteps.  He was bitten by the bug.  He struggled to find sponsorship but with a few benefactors, including George Harrison, he managed to scrape funds together to progress through the Formula stages and eventually to the pinnacle, Formula One, first with Brabham and then, from 1992, with Williams.

Hill worked as a test driver for Williams, a kind of understudy role for Nigel Mansell, before taking the wheel as Alain Prost’s team mate for the 1993 season. The grid included names like Senna, Schumacher, Patrese, Zanardi, Herbert, Irvine, Alesi and Berger.  A nasty feud between Ayrton Senna and Alain Prost gave the fans much to enjoy as these two top drivers fought each other tooth and nail every chance they got. Hill was often in amongst the tussles and passes and, as a result, was gaining valuable experience and toughness as a respected racer.  He had to be sharp in his attempts to beat them, to avoid mistakes and accidents. After a shaky start, he ended the season third in the championship behind Prost and Senna, scoring a total of ten podium places including a hat trick of wins.

The 1994 season was dominated by the deaths of Ayrton Senna and Roland Ratzenberger in separate circuit accidents at the San Marino Grand Prix. Damon Hill writes candidly and movingly about events surrounding the accidents, focussing on Senna’s because of his supreme status in the sport.  There is still debate, more than twenty years on, about Senna’s state of mind, about track safety and car reliability. It was and still is a shocking weekend in Formula One’s history, the deaths of a young driver in his third F1 race and a legend with seemingly nothing left to prove.  Controversially, the race was restarted with Michael Schumacher winning and Damon Hill coming in sixth. In the cold, hard world of sport, the show carried on but Formula One was never quite the same. Hill ended the season second, winning six of the sixteen races.

He was second in the championship in the 1995 season, enjoying/enduring a few tangles with Michael Schumacher but 1996 was the year it all came good.  All the struggles, challenges, emotional rollercoasters, money problems, media attention, family pressures and responsibilities, well as growing success, respect and confidence resulted in a World Championship.  It was well-deserved.  Hill, never really rated as a great driver by some and not always appreciated whilst at Williams, had proved an important point to his critics and to himself.  Murray Walker’s “I’ve got to stop, because I’ve got a lump in my throat” comments as the chequered flag dropped in Suzuka showed his joy for Damon Hill’s victory and lingers long in the memory as a pretty honest piece of commentary.

Hill moved to Arrows for a year and, finally, to Jordan on a two-year deal.  The Arrows season was dreadful but there were more signs of hope and encouragement with Jordan. He earned the team their first ever win. But after 1996, nothing was ever really satisfying and Hill decided to end his career as a driver at the age of thirty-nine.  He had had enough.

Damon Hill has written an excellent autobiography, full of stories about the Formula One circus, as we would expect, but infused with searing honesty about his life, the tragedies and triumphs within it, and about how he dealt with severe depression, navigating his way through some dark post-racing career times, and emerging as a more settled man. His story is one of dreams and nightmares and he is not afraid to let us into his world, a world that saw him join an elite group of people – F1 World Champions.