TROUBLES OVER THE BRIDGE BY JAMES ELLIS

I am looking forward to a trip home to Belfast to attend the launch of Troubles Over The Bridge by James Ellis. 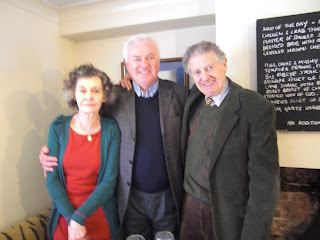 Robina Ellis, me, Jimmy Ellis on the occasion of his 82nd birthday, March 2013 at a 'thank you' lunch for Jimmy's foreword to my book on Stephen Boyd.


Here's a cut and paste from publisher Lagan Press's website, plus a link http://laganpress.co/blog/2015/new-release-james-ellis-troubles-over-the-bridge
I'll buy my copy in Belfast and, in due course, I will post a review right here. 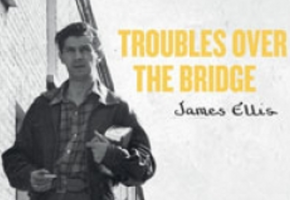 Belfast, 1959: the young Group Theatre director James Ellisis approached by playwright Sam Thompson, who announces “I got a play you wouldn’t touch with a bargepole!”
The play was Over the Bridge, Thompson’s powerful portrayal of a sectarian dispute in the city’s shipyards, a cutting commentary on contemporary life in mid-20th century Northern Ireland. After its effective banning by the Group Theatre’s board of directors following representations from the Unionist establishment, Ellis resigned from his position as a matter of principle in order to direct the production of the play.
In this book, Ellis provides a first-hand account of the strong and well-orchestrated attempts to censor Over the Bridge, and how these were overcome, allowing for the eventual staging of a dramatic work that would become a defining landmark in the cultural history of Northern Ireland.


James Ellis (1931-2014) was a Northern Irish writer, actor and stage director with a career stretching over sixty years. Best known for his work in television and film -mediums in which he maintained a high profile in for nearly forty years - he also starred in West End stage productions. As a stage actor he did seasons at the Barbican with the Royal Shakespeare Company, with the National Theatre and Sir Peter Hall's company at the Old Vic. Ellis is best remembered for his role as Bert Lynch in the long-running BBC TV detective/police series Z-Cars (1962-78).
'Troubles Over The Bridge' is available to pre-order now for £9.99, released on 23rd November.
ISBN : 9781908188557
- November 25, 2015