I have a number of letters in my research file on Stephen Boyd.  I am particularly fond of this one written by actor Robert Morley in 1982. I can hear his plummy voice as I read it. 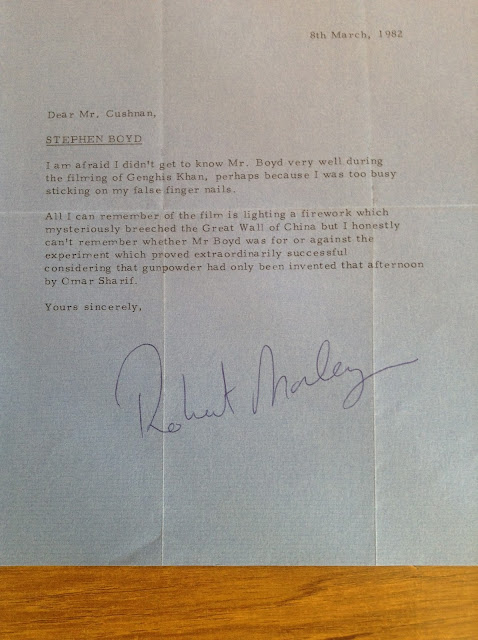 Stephen Boyd: From Belfast To Hollywood

Paperback available to buy now via the link below
A version of this book was published in 2013. I have made minor adjustments to the text, added some illustrations and some extra writing segments. "Stephen Boyd was one of the nicest, kindest people I have met in my lifetime, rare in this profession." - Euan Lloyd, film producer of Shalako, The Man Called Noon and The Wild Geese. "Joe Cushnan’s excellent biography of Stephen Boyd, the forgotten film star and a fellow countryman of mine, fills a disgraceful gap in cinematographic history and should be read by all who are interested in that fascinating subject." - James Ellis, actor in Z Cars, The Billy Plays, etc Stephen Boyd was one of the biggest film stars of the late 1950s and 1960s (The Man Who Never Was, Ben Hur, The Fall of the Roman Empire, Fantastic Voyage, etc), an ordinary boy from Northern Ireland who made a dream journey to Hollywood, starring alongside some of the most prestigious names in cinema including Tyrone Power, Susan Hayward, Gregory Peck, Brigitte Bardot, Charlton Heston, Sophia Loren, James Mason, Gina Lollobrigida, Omar Sharif, Doris Day, Sean Connery and Raquel Welch. This is the first book to celebrate his life and work. He had a 20-year film career, sadly cut short by his sudden death, aged 45, in 1977. Joe Cushnan is a freelance writer of books, features, reviews and poetry.
ISBN: 9781786101105
Total Pages: 208
Published: 5 September 2015
Price: £6.99
http://www.feedaread.com/books/Stephen-Boyd-From-Belfast-To-Hollywood-Revised-9781786101105.aspx