JACK LEMMON - ONE FROM THE AUTOGRAPH COLLECTION

Here is an autographed photo which he kindly sent when he was appearing in Long Day's Journey Into Night in London's West End, 1986, I think. 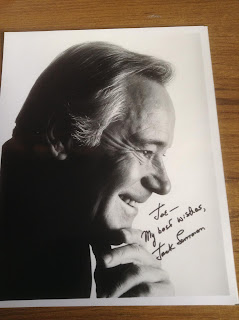 He was an extraordinary actor with a range from comedy to drama. On screen, he cut his teeth in various TV shows before wowing big screen audiences as Ensign Pulver in Mister Roberts (1955), holding his own alongside Henry Fonda, James Cagney and William Powell. He won an Oscar for best supporting actor. He struck comedy gold in Billy Wilder's Some Like It Hot (1959), performing hilariously in drag along with the equally hilarious Tony Curtis, a duo on the run from the Mob, who occupy themselves by pursuing Marilyn Monroe. Then came The Apartment (1960), Days of Wine and Roses (1962), Irma La Douce (1963), The Great Race (1965) and The Odd Couple (1965) as Felix Ungar, an inspired pairing with Walter Matthau's Oscar Madison.

But he had the knack of being brilliant in great films and brilliant in not-so-great ones. Always magnetic, he was one of the greatest actors in history.

He once said: 'I won't quit until I get run over by a truck, a producer or a critic." But it was cancer that stopped him in the end. He is buried in Westwood Memorial Park and his headstone says simply: 'JACK LEMMON in'. 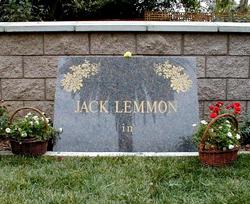