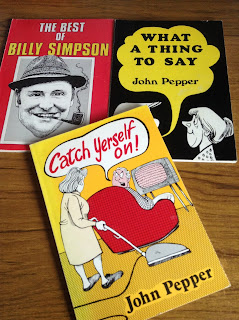 In past ages of tragedy, worry and despair, newspapers have always tried to include some light relief in cartoons and also in humorous writing. As a Belfast kid, through some of the darkest troubled days, I found solace, entertainment and laughs in the columns of John Pepper and Billy Simpson, both more often than not illustrated by the great Rowel Friers.

Billy Simpson was (maybe still is) an exceptional writer.  His column appeared on Mondays in the Belfast Telegraph and it was impossible not to crack a smile as he developed a story, launched a flight of fancy, stretched an observation and did what he was hired to do – be funny, and funny was guaranteed.  You never knew what to expect.  On one occasion he retold Custer’s last stand (“The Scalps My Father Wore”) with an Irish influence in the shape of Native Americans talking in Oirish accents and passing round the war shillelagh. In “The Barley That Shook The Wind” he described the Poteen Taster of the Year contest; in “Zer Boink Tapes” he exposed a scam of someone trying to sell tape recordings of conversations between William of Orange and Pope Alexander; in “Brief Encounter at the Customs” he imagined the scenario of a man trying to smuggle pythons in his underpants; “The French Concoction” had this introduction: “There are several things in life that a man should approach with caution. Matrimony. Unattended parcels. And home-made liquor.”  Classic humour that hit the spot back in the 1970s and, after a re-read, just as funny today.

But who are the humour columnists today? Point me in their direction.

I declare my readiness to step in, typewriter and wit cocked and loaded.
- June 24, 2019