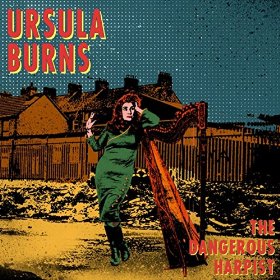 Before I listened to this album, if you’d asked me in a word association game to respond to “harp”, I would have said Mary O’Hara, Harpo Marx, lager and that dreamy music in films that introduces a wobbly screen flashback. That’s it. Have I won a major prize? And then I became aware of Ursula Burns via social media and I was sent a copy of her new CD. So, I put it on and waited for a nice, wee afternoon of plinkety-plonk, easy listening music to snooze by. Well, that didn’t happen. Far from it.

This is an album of soundscapes, of mini works of art, of enticing songs and incredible vocals that sometimes glide along beautifully whilst at others launches attacks with thunderous, epic arrangements. The first couple of times I listened to it at a respectable neighbour-friendly volume and then I thought to hell with it and turned it up to max. What a difference that made.

On the first listens, I noticed a preference to repeat lyrics and I thought that might be a hindrance to enjoying the album but actually it works perfectly, helping to underline great rhythms and to embed songs in the memory, a neat trick that has paid off.

I know comparisons are unnecessary and potentially unhelpful but I feel I must mention a few. Every now and then I was getting Stevie Nicks or Kate Bush or Lynsey de Paul but most of all I was getting the unique Ursula Burns, a performer not afraid to take risks. But what else is a dangerous harpist for? At times the songs are enchanting, the voice acrobatic in its rollercoaster lilts, in its sultriness, its drama, its vulnerability, its sense of fun, its emotion, its honesty, depending on the intentions of the songs. The musical arrangements and production quality are outstanding.

I liked the gentle Wifi Lullaby, the powerhouse percussion of Comedian, a song about the angst involved in making people laugh for a living, 365 Random Days, Spell Of Cold Weather and Crying In The Portaloo to select a few from an album that takes you on several magical mystery tours. It is a beautiful journey, bonkers at times, but it works perfectly.

So, sorry Mary and Harpo, (the lager stays put!), you might still be on the podium but the top step is now occupied by Ursula Burns who has made the harp rock. I have not heard anything quite like this album before. It is full of surprises, twists and turns, changes of direction and a list of ingredients that shouldn’t work as well as they do. It is clever, imaginative and brave. It might take you time to warm to it but give it time and plenty of plays and it will pay off handsomely. Once you get it, you’ll not regret it.