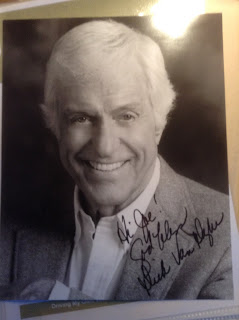 Dick Van Dyke is heading for his 95th birthday on 13 December 2020.
59 years ago, in 1961, The Dick Van Dyke Show was launched on US television.  Dick played comedy writer Rob Petrie and Mary Tyler Moore played his wife Laura.  It was a huge success, running to 156 episodes in its five-year life. It was great family TV back in the days when we only had a couple of channels and we were still in awe of American shows featuring cops, cowboys and comedians
I thought I'd just blog a little bit about Dick Van Dyke.  On screen, he has had various phases in his career from the aforementioned TV show to other small screen series and, of course, films.
In 1964, he co-starred with Julie Andrews in the enduringly popular Mary Poppins and became legendary, as Bert the chimney sweep, for the worst Cockney accent of all time.  But, whatever we think of his mangled attempt at being a Londoner, because of that role, we haven't forgotten him and probably never will.  Two years later, he struck gold again with the much-loved Chitty Chitty Bang Bang, playing Caractacus Potts.  Both films pop up regularly on TV, as indeed they should.
When The Dick Van Dyke Show ended in 1966, he made a so-so movie called Lt. Robin Crusoe, USN and followed that up with a couple of other efforts. In the 1970s, he made The New Dick Van Dyke Show, unrelated to the original premise and guest-starred in a great episode of Columbo as a murdering photographer.  That one surfaces every now and then, and it is worth catching.  More guest roles followed including an episode of Jake and the Fatman, starring William Conrad.  Van Dyke played a character called Dr. Mark Sloan, a role repeated in a couple of TV movies before being developed into a 178-episode hit series called Diagnosis Murder which ran from 1993 to 2001. Diagnosis Murder co-starred Dick's son Barry, and other Van Dykes appeared in various episodes through its long life.
When he started making The Dick Van Dyke Show in 1961, he was thirty-six.  When he started on Diagnosis Murder, he was sixty-eight.  In 2006, again with son Barry, he made several TV films under the banner Murder 101.  He was in his eighties.  Around that time, he starred in Night at the Museum as Cecil alongside Mickey Rooney, Ben Stiller and an all-star cast.  He was in a Museum sequel too.  I only mention the ages because I am trying to emphasise that Dick Van Dyke is a trouper, with show business in his blood, multi-talented, with the ability to warm the screen any time he appears.
Recently he was a hit all over again when a YouTube clip of him singing Chitty Chitty Bang Bang in a diner went viral. https://www.youtube.com/watch?v=6JWKXI8nEOQ
And he makes an appearance in the new 2018 film, Mary Poppins Returns!
A couple of years ago, I wrote to Dick Van Dyke to tell him how much of a fan I am of his work.  Out of the blue, one day, I received a lovely signed photograph from him - "Hi Joe! God bless, Dick Van Dyke".
- December 10, 2020