SAINT PATRICK'S DAY - THE HUMOUR IS ON ME NOW!

Saint Patricks Day on 17 March every year brings out the best and worst of Irish and Irish-related people all over the world. Of all of the things to like or dislike about the day across the spectrum from genuine sincerity and sentimentality through to pissed-up mindlessness, one aspect of the Irish gene that prevails is humour. 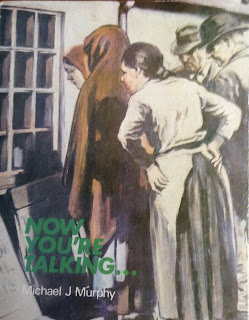 A couple of years ago a friend of mine called Damian gave me a copy of a book called Now You're Talking... by Michael J Murphy, published by Blackstaff Press in 1975. It is a collection, a treasure trove no less, of tales, yarns and stories heavily laced with wit, wisdom, sense and nonsense and all the ballyhoo associated with Irish storytelling.

Here's a few or the shorter extracts:

*
A Toast:
Here's to the top of the house
And the solid foundation;
The Hammers of Hell
And the Sledge of Damnation:
The curse of the priest
And the congregation
On any ould hag
That'll refuse me the daughter.

*
This man went into confession and told the priest he'd stolen a bit of old rope.
"What about that?" says the priest. "That was nothing."
"But, Father," says he, "there was a pig at the end of it."

*
The catechism says that God's fit to do anything; but there's three things He can't do:
He can't catch a baldy man by the hair of the head; He can't make two hills without a hollow; and He can't rise and give His seat to a better man."

*
Two Irishmen crossed to England to look for work as navvies. At the dockside they separated, each promising to return to the spot that evening to tell how they had got on. When one man returned he found the other sitting on a bollard staring at a rusted old ship's anchor lying agin a wall.
"What are you doing?" asked the returning navvy.
"I'm waiting to see the man who is going to use that pick."

*
Attributed to Dean Swift about a town which need not be named:
In ............ town
Without renown
With church, tower and steeple;
In every door
There stands a whore
Looking at decent people.

*
A giant in Munster heard of a giant in Ulster and set out to meet and kill the Ulster giant. When they met the Ulster giant says: "Yesterday I killed seven with one blow." The Munster giant decided he had heard enough and at once set back for Munster. The Ulster giant didn't tell him it was seven flies he had killed.

*
A Roman Catholic man who neglects to observe the obligation of attending Mass on Sundays and Holy Days is being chastised by a new priest for his neglect and is asked to give his reason for doing so. He says that if anything is stolen during Mass no one can blame him.

*
Three coldest things in the world - a frog, a dog's nose and a woman's elbow.

*
Penitents at confession when guilty of serious sin were ordered to make a pilgrimage with peas in their shoes. Two men, neighbours, had been given such a penance in confession, to walk from their homes to a distant church. Both set out together but one man soon out-paced the other who hobbled along. Eventually, in agony, the sufferer asked his neighbour how he did it. "Did you not put any peas in your boots?"
"I did," his neighbour replied, "but I boiled them first."

*
Happy, peaceful and a not-too-pissed Saint Patrick's Day to all.