I have had a near-40 year career mainly in retail management.  I have written about my career in two books – Retail Confidential and Much Calamity & The Redundance Kid.  I have managed and been managed.  I know how the people side of business is supposed to work and how it actually works. Such a handbook as this is essential to expose the existence, nature and disgrace of bullying and how to deal with it. 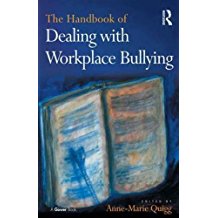 I don’t think I’ve been bullied in a workplace.  But, having read this enlightening and disturbing book, it’s made me think.  The book is enlightening because it gets to the very core of its subject thanks to the knowledge and expertise of the many contributors, including editor Anne-Marie Quigg.  It is indeed a handbook of factual information and practical advice. It is disturbing because it reminds us that bullying is an ever-present monster in far too many organizations, with some of those organizations blatantly encouraging heavy management tactics as part of their workplace cultures.  There are also senior managers who turn a blind eye or are in denial.  But the book is also very clear about what can be done to eradicate bullying.  The monster can be destroyed.

In one phase of my career a company that puffed out its mission statement and values to demonstrate that it was a great place to work because respect for individuals was at its heart employed me.  Most people across the ranks were decent folks but one boss, after years of being a fair guy, suddenly started to give me the cold shoulder and more than once he embarrassed me in meetings in front of colleagues.  He would cut short any comments I made and would get very picky about things that had never bothered him before. For several months, it was very unsettling and it affected how I felt about work when I got up in the mornings.  At the time, bullying did not cross my mind.  But now, on reflection after reading this book, maybe I was bullied.  Anyway, that’s a digression but I thought I would mention it.

The book has a handy but important prologue that defines bullying, bullies and patterns of bullying behaviour:

‘Bullying is a form of abuse. It can be power abuse, position abuse, racial abuse, gender-based abuse.  Harassment and sexual harassment are forms of bullying; they are simply manifested in different ways.” (Sheila K. Martin)

In her introduction, Anne-Marie Quigg, sets the scene:

“As yet, no single, globally accepted definition of adult bullying exists and there is no one-size-fits-all solution.  Increasingly, however, there is widespread recognition that workplace bullying is highly undesirable, destructive and costly in terms of personal as well as corporate experience.”

In my career, managers who enjoyed shouting and swearing at teams and individuals were often described as “old school” and “characters”.  I am talking about the 1970s and 1980s here and it was deemed acceptable behaviour.  In theory, from the late 1980s, with the softer focus on corporate cultures preached by so-called gurus (mainly American), we should have seen a reduction in poor management behaviour. Alas, it appears not to be the case.  All the leadership wisdom in the world has failed to resolve many aspects of business including and perhaps especially bullying.  I have experience of working with unqualified human resources managers who have gained such a position by being “good with people” rather than trained in the intricacies of employee welfare.

Bullying targets, as they are referred to in the book, have access to resources online and elsewhere to help them find a way through their traumas.  It seems there is a stigma to admit to being bullied but anonymous and/or confidential assistance is available for anyone too shy or worried to talk face-to-face with a sympathetic and practical contact.  In short, there is awareness, there is help, there is guidance, there is some legislation but there is still bullying.

Business leaders are a mixed bunch and whilst awareness of bullying has increased, management of it has not yet reached the top of the corporate agenda.  I have often been told at times in my career that people are the most important and valuable assets in any company.  Clearly, in practice, this is nonsense - theory versus practice, and a Grand Canyon between the two on this issue.

According to the book, as an example of scale, a 2014 survey about bullying in US workplaces found that 65 million American employees have been affected by workplace bullying. 65 million! I calculate that at around 20% of the population, give or take. Apparently, there are no current laws to protect US employees against workplace bullying.  So, whilst awareness has increased, there is no room on the agenda to tackle the problem. Bonkers.

Ireland, a country close to my heart and soul, is put under the microscope because of its exposure as a country with a terrible history of scandal and abuse in religious and government-supported institutions. Incarceration of and cruelty to orphans and unmarried mothers, for example, shames a nation famous for its hundred thousand welcomes.  Far too slowly, the truth is coming out, far too late for victims and survivors. The book also tours Europe and offers more uncomfortable reading as countries fail to do enough to safeguard people trying to earn a crust.

The Handbook of Dealing With Workplace Bullying brims with facts, analysis and advice on positive approaches for leaders not just to consider bullying and its impact but also to take appropriate actions.  There are many options available to tackle the problem, to encourage bullied employees to come forward without fear to help expose this rotten, miserable aspect of working life.

“Governments and judiciaries of the world have much to learn from each other, and in doing so they open up the possibility that one day workplace bullying will be universally condemned as unjust and a phenomenon not to be tolerated.” (Anne-Marie Quigg & Sheila K. Martin)

Isn’t it a shame that this exceptional and essential book had to be written? But written it is and its contents should be used widely to continue the work of telling the truth about bullying and, more importantly, encouraging effective action to erase the practice completely, indeed, to slay the monster once and for all.

Congratulations to all the contributors.

The only drawback I can see about this book is the price.  As I write this, it sells at £70 on Amazon.  Perhaps the publishers can explain the rationale here.  The price, as far as I can see, will limit the number of people who would like to read it, and it should, nay, MUST be read widely, studied and used extensively. The subject is too serious and important to be packaged so expensively.

EXTRA NOTE: Anne-Marie Quigg can offer a 35% discount on the price to anyone interested in buying a copy. Contact Anne-Marie here https://jacksonquigg.wordpress.com/ or via her Twitter handle @amq1

Posted by maplecourttales at 08:31 0 comments