THE POINT OF TIPPING?

A version of this was published in the London Paper a few years ago.  I was wondering in this age of austerity, how tipping has been affected.  I am a reluctant tipper. Why should it feel compulsory in some places? What's the point of tipping anyway?

It would be interesting to hear from waiters, waitresses and others (employers?) who expect tips, and from that range of customers - naturally lavish tippers to the refusers.

Tips boxes, buckets, bowls, jars, etc are appearing in all sorts of commercial establishments. Should staff have to, er, beg?  Should customers be pressurised? 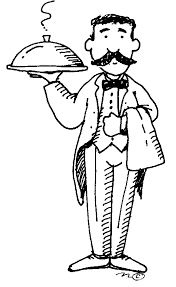 To tip or not to tip, that is the dilemma. A tip is always expected in most countries of the world, ask any taxi driver or waiter - but not always deserved.  Is tipping just a duplicitous way to supplement low wages? My answer is a resounding yes. The customer seems to be expected to pay extra for this thing called service, regardless of standards, especially in restaurants and taxis. Some time ago, a group of us went out to a pizza restaurant. The food was fabulous but the service was a little slow, a tad robotic and littered with several mistakes including forgotten starters, wrong wine etc. As a group we put in our share of the bill and I took it to the cashier. We had decided to leave the change as a kindly tip. Standing next to the till was the restaurant manager, an American as it happened, who watched the money being handed over and, in a mechanical calculator kind of way, he quickly worked out the change amount as a percentage of the total bill. As soon as I had generously said, “keep the change”, he glared at me with a Mount Rushmore stony face and said: “That’s only 8%. Isn’t that a little insulting to your waitress?”  I stood with my friends in a collective dumbstruck rigidity before saying: “The food was great but the service was just okay. Our tip reflects the service.” He continued to glare and complain about our stinginess citing at least 15% as a starting or indeed tipping point. We stood firm and left the restaurant wondering why we felt like naughty schoolchildren.  Clearly, in this case, the customer is always right except when he’s wrong.
This kind of pressure happens all too often either from the management or from the hangdog waiting staff who are only interested in supplementing their meagre wages.  It is interesting to note the fickleness of people in service jobs, where friendliness, helpfulness, sincere good manners and efficiency should be delivered willingly and well all the time.  At the point of payment,  some catering staff change attitudes like Jekyll and Hyde at the absence of a tip, turning surly and huffy to show their disappointment.  So, were they really suited to the customer service job in the first place?  Was the whole service gloss just a sham?

Here’s a warning notice I would like to see outside restaurants: “THIS RESTAURANT DEMANDS THAT YOU AGREE TO PAY ANY SERVICE CHARGE WE DECIDE TO PRINT ON YOUR BILL AND IT WANTS YOUR GUARANTEE THAT YOU WILL TIP WAITING STAFF WITH AN AMOUNT NOT LESS THAN 12.5%.  IF YOU DON”T COMPLY, WATCH OUT OR DON”T ENTER IN THE FIRST PLACE”.   If I saw a notice like that, I would know their stance and where I stood and I would avoid the restaurant, nip to Sainsbury's and buy a deep pan pepperoni to eat at home.   This tipping exploitation of customers and wage deprivation of staff by catering and taxi people is not just a UK disease.  On recent trips to California, everybody, it seemed, waited for a tip including the hotel doorman (but not the hotel receptionist, strangely enough), the porter, the maids, the bartender, the restaurant staff, the taxi driver and anybody else who could screw us for a few more dollars.   In one restaurant near Sacramento, a colleague and I went to a self-service (hold that thought) Chinese restaurant. We were shown to a table and then told to help ourselves from the buffet counters. We did just that, had a fine lunch and as we walked out, we could see a table clearer straining his neck to clock if we had left a tip in our booth. We hadn't, of course, but if his face had been a laser, the look he gave would have melted us on the spot. Tipping in a self-service restaurant?  What?   More recently, in another Chinese restaurant, this time in London’s Soho, we were a table of seven and our host decided not to leave a tip on top of the included service charge.  Our waiter’s facial expression, body language and attitude, formerly Saturday night game show host happy, smiley and charming, turned to Charles Bronson in “Death Wish” in a heartbeat.  It’s that arc from “greetings” to “grrrr”.

I have more stuff on tipping.....but I don't want to bore you.

Have a nice day.