On 22 June, 1847, Hanson Gregory, an American, claimed to have invented the ring-shaped doughnut on board a limestone trading ship when he was 16 years old. Gregory was dissatisfied with the greasiness of doughnuts twisted into various shapes, and with the uncooked centres of regular doughnuts. He claimed to have punched a hole in the centre of the dough with the ship's tin pepper box.

There have been many claims and versions.  It’s a sort of interesting piece of trivia in a who-cares kind of way.

Growing up in Belfast, ring doughnuts were called gravy rings.

Incidentally, one of the earliest mentions of a dough-nut was in Washington Irvine’s 1809 book, A History of New York, from the Beginning of the World to the End of the Dutch Dynasty:

“Sometimes the table was graced with immense apple-pies, or saucers full of preserved peaches and pears; but it was always sure to boast of an enormous dish of balls of sweetened dough, fried in hog’s fat, and called dough-nuts, a delicious kind of cake, at present scarce known excepting in genuine Dutch families.” 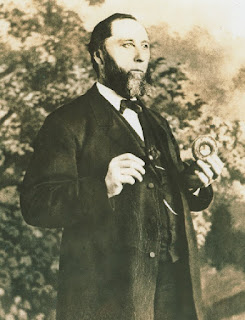 From crewman to Captain Hanson Gregory
and a gravy ring.

Sources: Wikipedia and others