Raphael Ravenscroft was born on 4 June, 1954.  He was a musician, composer and author. He played the saxophone riffs on Gerry Rafferty's 1978 hit Baker Street. He said he was paid £27.50 for the session, the musician’s union rate at the time.  The song is said to have earned Rafferty £80,000 a year in royalties.

After the success of Baker Street, Ravenscroft said his phone never stopped ringing with requests for his session skills.  He jumped from £27.50 to £5,000 per session!

Ravenscroft worked with Gerry Rafferty on other albums and he contributed to a variety of recordings by artists such as Pink Floyd, Chris Rea, Robert Plant and Bonnie Tyler.

In 2011, he told a radio interviewer that he felt the saxophone riff on Baker Street was out of tune and flat ‘by enough of a degree that it irritates me.’

Ravenscroft wrote a series of books under the banner of The Complete Saxophone Player. 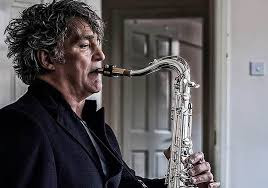 Sources: Wikipedia and others.