REIWA - A WORD FROM POETRY FOR ALL OF US

Available for freelance writing commissions on a variety of subjects including family history, nostalgic Belfast and its famous people, shops, shoppers & shopping, the golden age of Hollywood (esp westerns) and humorous pieces on life's weird and wonderful. Op-eds, columns, non-fiction book reviews too. Sometimes, I get mad as hell!

joecushnan@aol.com & @JoeCushnan
On Monday 1 April, 2019, I was on a coach with about two dozen others travelling from the Tokyo Prince Hotel to Mount Fuji. Our guide, Rumi, was very informative and entertaining about her city and country. She was fun. She taught us how to count from 1 to 10 in Japanese and a handful of useful phrases, some harder to say than others.

At a couple of points on the road, we caught glimpses of snow-topped Fuji but as we got closer the clouds rolled in and the mountain disappeared. No matter, we saw it and that's what counts. Our stopping place was at the base of Mount Fuji and Rumi kindly told us that we could claim to be standing on the sacred ground. It was a great morning.

On the way, she could not contain her excitement about some news that would be announced at noon that day. It was known that the current Emperor Akihito was abdicating and his son, Crown Prince Naruhito would ascend to the Chrysanthemum throne starting on the 1 May.

The exciting news was to name the new Imperial era. So, after a brief spell on Mount Fuji's lower level, it was back on the coach just before noon. Rumi was near-giddy and couldn't wait to tell us that the name of the new era is REIWA. She explained that it means order and harmony. 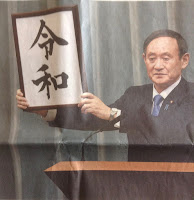 Next day, The Japan Times, of course, splashed the story on the front page, illustrated by Chief Cabinet Secretary, Yoshihide Suga, holding up the kanji for Reiwa. 'Suga said the name was formulated based on the introduction to a set of poems from Manyoshu, the oldest existing compilation of Japanese poetry. The first character represents good fortune, while the second can be translated as peace or harmony. (Close enough to Rumi's interpretation.)

It was a nice feeling to be in japan on that day and to witness such excitement. How different, I couldn't escape the thought, from the depressing state of politics back home, with absolutely nothing and no one to enthuse and inspire.

Whatever anyone thinks of Japan, its history, politics and culture, Reiwa is a word we should all use in thought, spirit and action.