Like many film and TV fans, I bang on about the stars we label as 'greats' because they are great. But I also love the magnificent supporting actors who don't always get the recognition they deserve. And then there is another category, the actors who just get on with the job and who don't seem bothered about status. I might be wrong but I'm thinking here of Brian Dennehy. I happened to see him last night in an episode of The Blacklist, the James Spader crime show, and I thought I'd write a bit about him, undoubtedly a terrific actor, one of my favourites, someone who warms the credits of any production and someone who was kind enough a few years ago to send me a signed photograph.

As it happens, 9 July will be Brian Dennehy's 79th birthday, so the timing is good. He was born in Connecticut in 1938 and raised in New York. He was a history major, then a US Marine and later a stockbroker, as well as a sporty type and a dramatic arts student. He came to screen prominence as the antagonistic Sheriff Will Teasle in First Blood (1982) tussling with Sylvester Stallone's John Rambo.

His early TV roles included Kojak, M*A*S*H, Lou Grant, Dynasty and Knots Landing. Early film parts included Semi-Tough, Foul Play and Butch and Sundance: The Early Days. But First Blood was the one that made the difference to his career. He continued to work on the big and small screens, as well as in theatres.

He has chalked up a considerable list of movie credits: Silverado, F/X, Legal Eagles, Best Seller to name a few but didn't neglect TV where he scored with the Jack Reed series of cop films. He gained wide acclaim for his role as Stourley Kracklite in The Belly of the Architect and for Death of a Salesman, playing Willy Loman both on stage and in a television film.

He has been nominated for and won many awards including Tonys for Death of a Salesman and Long Day's Journey Into Night. He also won a Laurence Olivier award for Salesman, as well as a Golden Globe.

He has appeared in stage productions across America, as well as in Canada, Dublin and London.

Brian Dennehy is a brilliant screen and stage actor, to a lot of people a man with a very recognisable face and huge presence (he's a big guy!), although they might not always remember his name.

In August 2005, he was appearing in Death of a Salesman in London. I wrote to him asking for an autograph. He sent back this signed photo. 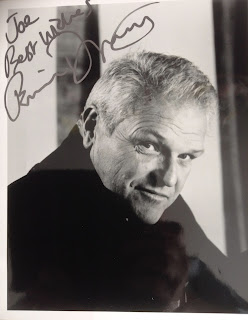