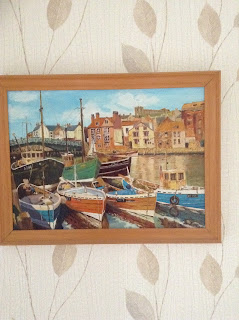 This painting hangs on our landing wall. It is an original painted by Jack Woodcock, my late father-in-law. It's a nice painting and just one example of his talents.

I'm just back from Wickes DIY store and, as usual when I'm in such a building, I always think of him. He was a very practical man, fixing things, making things, building things for reasons of necessity or enjoyment. He loved browsing round hardware stores.

He had a shed, well-organised, tidy and the hub for his ideas. He liked to potter but, more importantly, he loved to create.

We have a few small items of furniture that he made for us, little reminders of his skills in various parts of the house. Not being a natural DIYer myself, over the years he has helped us out by solving all sorts of household problems.

Once, to pursue his musical interests, he built an electric organ from a tricky self-assembly kit. So what? Well, he did it by following the illustrations and using his head for the instructions were in German and he didn't know much German. The organ with all its bells and whistles was a triumph. He was a self-taught organist, learning from music books and LPs by Klaus Wunderlich.

I suppose one of the points I'm making is that the likes of Jack Woodcock, from a generation ago, learned skills in a make-do-and-mend world and had a hands-on approach to life, unlike us in this throwaway era.