This morning, the news that Harry Roberts is to be freed from prison reminded me of the effect his mugshot had on me when I was a wee boy.  The Belfast News Letter published this piece in March 2009.

Tormenting Picture of a Killer
by Joe Cushnan 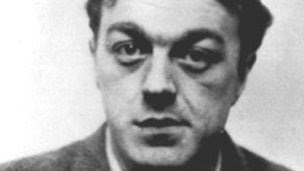 WE all know that certain smells, sounds and images can stimulate the senses and trigger memories of childhood. You know the sort of thing: mother’s apple tart freshly baked and hot from the oven; frying bacon sizzling and spitting in the pan alongside pork sausages and potato farls; Michael Holliday singing The Runaway Train; the theme from Housewives’ Choice filling the scullery with a soundtrack to the daily chores; and even Pinky and Perky murdering one or two hits of the 1960s – all tiny fragments of nostalgia to bring a smile for the joy of days gone by.

But like most things in life, memory and nostalgia also have a dark side and something happened last week to transport me back to a time when I was 12 years old. I saw a photograph in the newspaper. The accompanying news that a man called Harry Roberts, labelled Britain’s most notorious police killer, could be freed from jail after serving 42 years, jolted me back to some nightmare weeks in 1966 when Roberts was on the run, hiding out in Epping Forest during a massive manhunt. He shot dead two young policemen and was complicit in the shooting of a third constable so, by any accounts, he was a nasty piece of work. He managed to avoid arrest for three months and because he was an evil fugitive his photograph was all over the television news and newspapers. It was this picture that haunted me because, at a young age, I understood the evil in his eyes and the terrible things he would do to me if he turned up at our house looking for a place to hide out. He had a kind of Jack Palance look about him, entirely unpleasant and certainly not the kind of man you would want to get stuck in a lift with for even a nano second. The fact that Epping Forest was hundreds of miles away from Belfast did not ease my concerns that Roberts could be banging on our door at any minute. He was the bogeyman, a real life baddie who, for a time, overtook my fear of banshees, those wispy screechers who, it was said, wailed the nights away in Smicker’s field, a few hundred yards up our back garden. Roberts was in a different league. Banshees were not as frightening – perhaps, maybe, hopefully.

My fear of this man, from the mugshot, was so intense that when my mother asked me to go into the airing cupboard to switch on the hot water I couldn’t do it at first. I had the notion that Harry Roberts, on the loose and with the military skills to be anywhere in any disguise at any time, would emerge from the piles of towels and sheets to grab me by the throat and throttle me before I knew anything about it. My mother would only realise I was missing when she ran a bath and discovered that the water was stone cold. Later, in bed, I would try to erase the picture of Roberts from my head, but it kept returning, kept me from falling asleep quickly and, coupled with the noise of the wind outside, rustling trees, occasional footsteps of passers-by and general creaks and groans from the walls and rafters, it made for a very scary experience. I would wrap myself tightly in bedclothes in the hope that my eiderdown armour would protect me through the night.

I look at the 1966 picture of Harry Roberts in today’s newspaper and it still sends a shiver down my spine but, I kid myself, now that he is 72 years old, that if he came round our way looking for trouble, I could take him and exorcise all those childhood demons. But he won’t and I won’t because I’m not hard enough and, hopefully, neither is he any more. But I still hesitate any time I go to the airing cupboard, for you never know, as you reach for a clean towel, who or what might make a grab for you. But you can do it. Go on, be brave and hum The Runaway Train to give you that little bit more courage. Know what I mean, Harry?